Skip to main content
SPRING CYBER EVENT STARTS NOW: And it's a really BIG deal! Up to 88% off through 5/24>
Adventures in Odyssey The Imagination Station ® #4: Revenge of the Red Knight
By: Marianne Hering, Paul McCusker
Stock No: WW26406EB 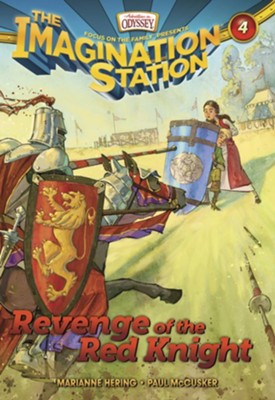 Adventures in Odyssey The Imagination Station ® #4: Revenge of the Red Knight

▼▲
In this Imagination Station adventure Patrick and Beth find themselves as guests in a beautiful castle in 15th century England. Through a series of events, the steward of Lord Darkthorn's castle finds the cousins with three artifacts collected in their previous adventures: the stone, the cup, and the golden tablet. They are accused of being thieves and locked in jail. Beth escapes and discovers the identity of the real thief, leading to a jousting contest with a surprising outcome.
Set during the War of the Roses in England, Revenge of the Red Knight will teach readers about the Crusades, the integrity of knights and the vows they took, and why men would choose to risk their lives to fight for Christianity.

▼▲
Revenge of the Red Knight, the fourth book in the Imagination Station series, combines the writing talents of Marianne Hering and Paul McCusker for a fun adventure. Cousins Patrick and Beth are thrust into the medieval period by the Imagination Station, a machine built by Mr. Whittaker to help children experience history.

This time and place is home to Albert, Mr. Whittaker's ancestor, whom the kids have been trying to save in the first three books by collecting treasures from elsewhere in history. But the evil Hugh wants the treasures for himself. Patrick and Beth, with the help of Sir Andrew and his squire James, must stop Hugh and protect Albert. The books climax is a tense jousting scene where Patrick and Beth must protect Sir Andrew and unveil Hughs schemes.

The series is written at a second grade reading level, but that didn't keep me from being pulled into the plot from the beginning. Patrick and Beth's quest to save Albert begins in the first book of the series, Voyage with the Vikings, and it doesn't end with this installment. Even so, the ample prologue enabled me to follow the plot from this book.

Those familiar with the audio drama "Adventures in Odyssey" will find the series intriguing, as the Imagination Station now seems to have a mind of its own. However, kids who have never listened to "Adventures in Odyssey" can understand the story just as easily. The series is patterned off the Magic Tree House books, which also teach kids about history. But, Patrick and Beth know magic doesn't exist. The Imagination Station, its sometimes-faulty programming, and Mr. Whittaker control everything. Every Imagination Station book has a Christian perspective on history and life.

At the end of the book is a puzzle with a code word that unlocks a prize on the series' website, www.theimaginationstation.com. The website also contains a suggested vocabulary list and a digital copy of the book. Kids with sufficient reading skills can enjoy Revenge of the Red Knight and its quality illustrations on their own, or families can read them aloud. Who knows, maybe younger kids will catch their older siblings reading about Patrick and Beths adventures. Alexandra Mellen, www.ChristianBookPreviews.com

▼▲
I'm the author/artist and I want to review Adventures in Odyssey The Imagination Station ® #4: Revenge of the Red Knight.
Back
Back