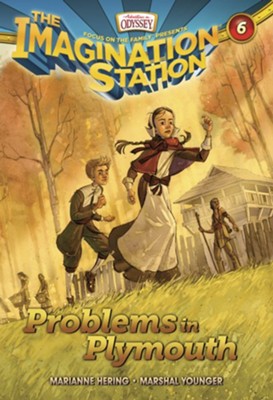 Adventures in Odyssey The Imagination Station ® #6: Problems in Plymouth

By: Marsahal Younger, Marianne Hering
More in Imagination Station Series
Focus on the Family / 2012 / ePub
4.5 out of 5 stars for Adventures in Odyssey The Imagination Station ® #6: Problems in Plymouth (21 Reviews) Write a Review
In Stock
Stock No: WW26408EB

▼▲
Patrick and Beth's next adventure leads them to Plymouth Plantation in 1621, where they meet William Bradford, Miles Standish, and Chief Massasoit, who are trying to establish peace between the Pilgrims and the Indians. Things are anything but peaceful though when a musket is stolen and the Pilgrims conclude that the Indians are planning war. Only Patrick and Beth know who the real thief is-the traitor Hugh-and it's up to them to find him and stop him from causing trouble. When the cousins hear a gunshot during the first Thanksgiving feast, their worst fears are realized. They rush to the Mayflower and try to set right history, even as Hugh desperately tries to change it.

▼▲
Kids can explore the world of the Pilgrims in Problems in Plymouth, the sixth Imagination Station book by Marianne Hering and Marshal Younger. The Imagination Station helps kids learn about history by using their imagination, but lately it has malfunctioned. Cousins Patrick and Beth are the only two it will allow inside. The two go to Plymouth, Massachusetts, to find the villain Hugh, who has been traveling through time, causing trouble. But, before they can do anything, they are captured by Native Americans along with another Pilgrim boy.

When released, Patrick and Beth meet the Pilgrims and spend the first Thanksgiving with them. Even then, they must keep watching for Hugh, whom they fear will try to start a war between the Pilgrims and Native Americans. As the story progresses, they learn the value of taking risks for the sake of peace as instructed in Romans 12:18.

This chapter book is the last in a mini-series about Hugh and the ring he stole that allows him to travel through time, so its ending is resolved. But more books in the series are coming. The books echo the style of the Magic Tree House series, but, instead of magic, a quirky machine built by Mr. Whittaker ferries the children through time. Fans of the audio drama Adventures in Odyssey will enjoy the Imagination Stations antics, but readers do not have to be familiar with the show in order to understand the books.

The series is geared for early elementary readers, and its website, www.theimaginationstation.com, provides a vocabulary list of harder words in the book. It also reveals a prize when the secret word from the books puzzle is typed in.

▼▲
I'm the author/artist and I want to review Adventures in Odyssey The Imagination Station ® #6: Problems in Plymouth.
Back
Back