Skip to main content
CUSTOMER APPRECIATION SALE: Thousands of starry deals through 6/22!
Adventures in Odyssey The Imagination Station ® #11: Hunt for the Devil's Dragon
By: Marianne Hering & Batson
Stock No: WW39146EB 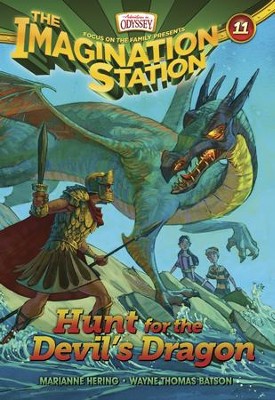 Adventures in Odyssey The Imagination Station ® #11: Hunt for the Devil's Dragon

By: Marianne Hering & Batson
More in Imagination Station Series
Focus on the Family / 2013 / ePub
5 out of 5 stars for Adventures in Odyssey The Imagination Station ® #11: Hunt for the Devil's Dragon (1 Review) Write a Review
In Stock
Stock No: WW39146EB

▼▲
Join cousins Beth and Patrick as they are whisked away for Libya in the 13th century. The town of Silene is being terrorized by a vicious animal that is eating livestock, and the townspeople believe it's a dragon sent by the devil. To appease the beast, the people believe they must offer up a human sacrifice---a young girl named Sabra.
When Beth tries to help Sabra escape, she too is tied up as an offering for the dragon. Meanwhile, Patrick and a new friend named Hazi join Georgius, a Roman knight who is serving in Africa to keep peace. Georgius decides to find the dragon and kill it, but his plans go awry when Beth and Sabra beg him not to kill it. The girls know the true secret of Silene---and the dragon isn't its worst enemy.

▼▲
I'm the author/artist and I want to review Adventures in Odyssey The Imagination Station ® #11: Hunt for the Devil's Dragon.
Back
Back