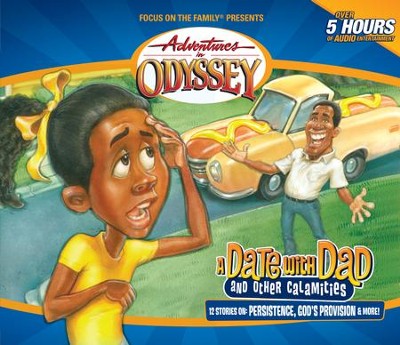 Adventures in Odyssey ® #46: A Date with Dad

▼▲
Marvin's got a job and his sister Tamika is riding around in a hot dog car...what's going on with the Washington family? And Bart Rathbone becomes an intern at Whit's End?!? In A Date with Dad (and Other Calamities), meet families just like yours - only with a few more wacky situations! Plus, you'll join Eugene's action-packed search for his father - a hunt that takes Whit and Eugene from forgotten relatives, to a spy agency and beyond.

▼▲
Tamika is growing up, but Ed’s the last to get it. How would you like to drive around in a life-size hot dog? With your dad?! Meanwhile the newest wordsmith in town—that would be Connie—may not get published at all if she can’t beat a bad case of writer’s block. Over at Whit’s End, Bart Rathbone is the new intern—hide the valuables for safekeeping! Check out small-town living at its zaniest. A Date with Dad (and Other Calamities) explores responsibility, growing up, and other themes. Bonus features include the first-ever audio commentary with the writers and producers! Listen to the episode “Switch,” then learn how the show was created, fun facts on sound design, and much more in a separate 25 minute bonus track.

For over 18 years, Adventures in Odyssey has been written and produced by award-winning professionals. Each half-hour audio drama utilizes original music and film-quality sound design. Recorded in Los Angles, the voice talent on Adventures in Odyssey has been featured in such films as The Land Before Time, Charlotte’s Web, Mickey’s Christmas Carol, and thousands more!

▼▲
I'm the author/artist and I want to review Adventures in Odyssey ® #46: A Date with Dad.
Back