Skip to main content
Adventures in Odyssey®: Novacom Saga 10-CD Set with CD-ROM
By: Focus on the Family
Stock No: WW975415 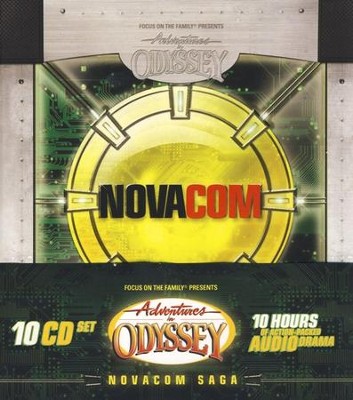 ▼▲
The Adventures in Odyssey team has assembled the entire intense Novacom saga into one exciting 10-CD set! With well over 10 hours of action-packed audiodrama, you'll relive all the thrilling episodes as the truth is slowly revealed about Novacom Broadcasting, a seemingly family-friendly company. Soon after the company moves into Odyssey, strange events begin happening. Whit finds hidden cameras in his office, Eugene disappears, and the Imagination Station's blueprints are stolen. What would someone want with those blueprints--could Whit's invention be used for evil instead of good?

Meanwhile, Connie begins a relationship with a guy who works for Novacom, but he seems to be hiding something from her. Can she really trust him? Also, Whit's son Jason, working as a missionary, finds some strange things happening far away from Odyssey. Could these events be somehow related to Novacom?

In this special collection of the Novacom saga, which originally aired from 2000 to 2002, you'll find 9 CDs with 28 episodes and a bonus disc filled with lots of special features! There's more than an hour of new interviews, bloopers, and other behind-the-scenes bonus material, as well as a 16-page booklet with an episode guide, actor photos and a never-before-released "Evil Master Plan" of Novacom Broadcasting. Also, you'll find a CD-ROM with special video bonus material of the actors in the recording studio. With lessons on truth, trusting God, and spiritual warfare, the thrill-a-minute Novacom Saga presents this complete epic miniseries, plus bonus features, in one action-packed set! Recommended for ages 8 and up.

▼▲
Join Odyssey’s biggest adventure ever!
When NovaCom Broadcasting moves into the town of Odyssey, the media company gives every impression of being family friendly—until unexplained events begin to happen. Whit finds hidden cameras in his office . . . Eugene disappears . . . and blueprints for the Imagination Station are stolen. Could Whit’s invention be used for evil instead of good?

Meanwhile Connie begins dating a man who works for NovaCom. But can she trust a guy who seems to be keeping secrets from her? Soon Whit’s son Jason realizes that the strange things he’s noticed overseas may actually be pieces to this complex puzzle. With lessons on truth, trusting God, and spiritual warfare, the thrill-a-minute NovaCom Saga presents this complete epic miniseries (plus new bonus features!) in one action packed set.

▼▲
I'm the author/artist and I want to review Adventures in Odyssey®: Novacom Saga 10-CD Set with CD-ROM.
Back