Skip to main content
SPRING CYBER EVENT STARTS NOW: And it's a really BIG deal! Up to 88% off through 5/24>
Adventures in Odyssey ® Passages: Darien's Rise
By: Paul McCusker
Stock No: WW975903 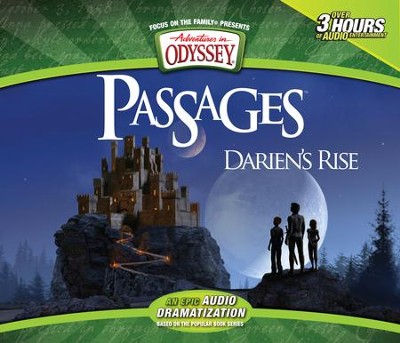 ▼▲
When Whit and Jack find an old notebook labeled "Chronicles of the Chosen," they discover a mysterious "other world." Is Marus real? It is to Anna and Kyle! One minute they're exploring an abandoned house and the next they're caught between a mad king and the rightful heir to the throne. Are they trapped forever? Ages 8 to 12. Three CDs.

▼▲
Each Passages manuscript chronicles the adventures of kids from Odyssey, in different times, who travel to an alternate world called Marus. At first unbeknownst to the listener, each Marus manuscript is actually a Bible story retold in a fantasy setting. Through each tale, John Avery Whittaker (“Whit”) and Jack Allen investigate, unearthing a larger story that connects all six manuscripts. As the epic stories play out in Marus, Whit and Jack must race to solve the mystery of this hidden land. In Darien’s Rise, two kids from Odyssey find themselves transported to a strange new world. They are immediately caught up in a struggle between a power-mad king and his valiant young general. (This is the story of David and King Saul retold in a medieval setting.) Enter a land where belief in God becomes the adventure of a lifetime! All new content!

▼▲
I'm the author/artist and I want to review Adventures in Odyssey ® Passages: Darien's Rise.
Back
Back