Skip to main content
Adventure in Autou
By: Yvonne Alexander
Stock No: WW302628 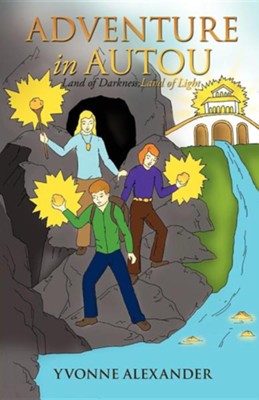 ▼▲
What was meant to be a two week summer vacation in the mountains of Pennsylvania became anything from ordinary for Greg and Katie. On their first visit to an abandoned house, the two stumbled upon a mysterious chest that held more than they expected. By the time the children realized what they had discovered they were already in the world of Autou and soon caught in a powerful struggle between good and evil. With their new friend Robyn, Greg and Katie were enlisted to help save two people from their own world, as well as free countless inhabitants from the fearful Ophis whose goal was to return all of Autou to darkness and slavery. The three children had a difficult journey ahead which involved a magic ring, new creatures, and an ancient prophecy all the while trying to be home in time for dinner. Yvonne Alexander has been known for her creativity and storytelling. She is the mother of five, grandmother of eleven, and was an Art Teacher for seventeen years for an accredited Christian School. During those years countless children would often listen to her imaginary tales, as they worked on their art projects. She is a graduate of Mary Washington College and holds a B.A. degree in Art and Secondary Education. Recently widowed, she still resides on the Eastern Shore of Maryland where she enjoys all her family and often entertains her younger grandchildren. She enjoys writing as well as speaking and authored another non-fiction book "Count It All Joy" in 2001.

▼▲
I'm the author/artist and I want to review Adventure in Autou.
Back