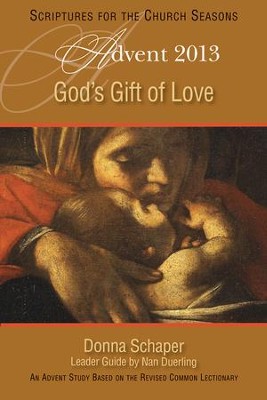 God's Gift of Love: An Advent Study Based on the Revised Common Lectionary - eBook

▼▲
Advent is a busy and sometimes stressful time of year, but in God’s Gift of Love, Donna Schaper reminds us that Advent also gives us an opportunity to slow down, recognize that God’s love has found us, and live in peace. By changing our attitude and our understanding of time, we can prepare for and look forward to the coming of Jesus Christ. We can be ready to conceive God’s love in us and reconceive our lives and our behavior toward others. Schaper’s writing helps us understand that love is not a sentiment but a way of life that emerges from the knowledge that in Jesus Christ, we experience God’s love. God’s Gift of Love offers the opportunity and challenge to appreciate and live in the amazing gift of God’s love by studying the Revised Common Lectionary readings designated for Advent, Year A. Donna Schaper helps readers experience the blessings of Jesus’ birth and Christ’s second coming in the fullness of time. A Leader Guide by Nan Duerling, with Bible background and suggestions for group activities, is included in this book.

Dr. Nan Duerling has been writing and editing curriculum resources for youth and adults since 1984. The editor of The New International Lesson Annual, Nan has also contributed to resources including Mature Years, Scriptures for the Church Seasons, Seasons of the Spirit, Leader in the Church School Today, and Bible Lessons for Youth. When she served as a member of the Committee on the Uniform Series of the National Council of Churches, Dr. Duerling participated in the development of the annual cycles for the International Lesson Series and worked with the youth team as a consultant. Nan taught in the Course of Study School at Wesley Theological Seminary in Washington, D.C. from 1987 until she retired in 2008.

Nan lives in Cambridge on Maryland’s picturesque Eastern Shore with her husband Craig, her mom Ruth, Craig’s mom Helen, and two lively Curly-Coated Retrievers, Ada and Bentley, who are registered therapy dogs. The Duerlings are members of historic Zion United Methodist Church, where Nan leads a weekly lectionary study group for the community.


Donna Schaper serves as Senior Minister at Judson Memorial Church in New York City. She has also served churches in Florida, Massachusetts, Pennsylvania, and Arizona. She is the principal in a consulting firm called Bricks Without Straw, which shows not-for-profits how to raise energy and money and capacity, and has been involved with a series of turn-around congregations and a host of social-action issues. In addition to serving as pastor, she has written several books. Donna lives in New York, New York.

▼▲
I'm the author/artist and I want to review God's Gift of Love: An Advent Study Based on the Revised Common Lectionary - eBook.
Back
Back