We are OPEN and SHIPPING - click here for shipping estimates
PRE-SUMMER CYBER SALE EXTENDED thru 6/1 ~ Over 2,500 items up to 90% off
Advancing Through Adversity - eBook
By: Charles F. Stanley 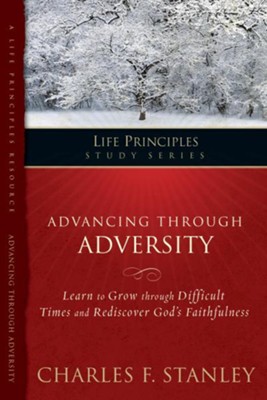 Dr. Charles Stanley's new series of Bible study guides feature insights and wisdom of this beloved pastor and author. Small groups and individuals who want a Bible study that's spiritually sound and practical will find a wealth of ideas to help them understand and apply the Scriptures to the real world. Each title takes a unique fourfold approach to get the most out of Bible study time - emphasizing personal identification with the Scripture passage, recognition of your emotional response, reflection of the passage's meaning and application, and taking steps to apply what's been learned. This is a sound way to explore the Word of God.

Dr. Charles Stanley is senior pastor of the First Baptist Church of Atlanta, where he has served for more than 40 years. He is a New York Times bestselling author who has written more than 60 books, including the bestselling devotional Every Day in His Presence. Dr. Stanley is the founder of In Touch Ministries. The In Touch with Dr. Charles Stanley program is transmitted throughout the world on more than 1,200 radio outlets and 130 television stations/networks, and in language projects in more than 50 languages. The award-winning In Touch devotional magazine is printed in four languages with more than 12 million copies each year. Dr. Stanley’s goal is best represented by Acts 20:24: "Life is worth nothing unless I use it for doing the work assigned me by the Lord Jesus--the work of telling others the Good News about God's mighty kindness and love." This is because, as he says, "It is the Word of God and the work of God that changes people’s lives.

▼▲
I'm the author/artist and I want to review Advancing Through Adversity - eBook.
Back
×
Back
×