CHRISTMAS MEGA SALE: Save up to 85% off through 10/20 >
Advanced Bible Course: Studies in the Deeper Life
Narrated By: Stephen Sobozenski
By: E.W. Kenyon 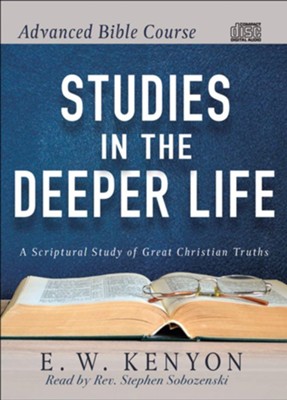 ▼▲
This outstanding audio Bible study course by legendary teacher E. W. Kenyon was created to lead Christians into a deeper walk with the Master. Profound scriptural truths are presented in a simple and east-to-understand manner. As it takes you through the pages of the Bible, you will begin to see who you are in Christ, what He has done for you, and your standing before God the Father. An ideal study for both groups or individuals.

▼▲
E. W. Kenyon (1867–1948) was born in Saratoga County, New York. At age nineteen, he preached his first sermon. He pastored several churches in New England and founded the Bethel Bible Institute in Spencer, Massachusetts. (The school later became the Providence Bible Institute when it was relocated to Providence, Rhode Island.) Kenyon served as an evangelist for over twenty years. In 1931, he became a pioneer in Christian radio on the Pacific Coast with his show, Kenyon’s Church of the Air, for which he earned the moniker "The Faith Builder." He also began the New Covenant Baptist Church in Seattle. In addition to his pastoral and radio ministries, Kenyon wrote extensively. Among his books are The Blood Covenant, In His Presence, Jesus the Healer, New Creation Realities, and Two Kinds of Righteousness.

▼▲
I'm the author/artist and I want to review Advanced Bible Course: Studies in the Deeper Life.
Back
×