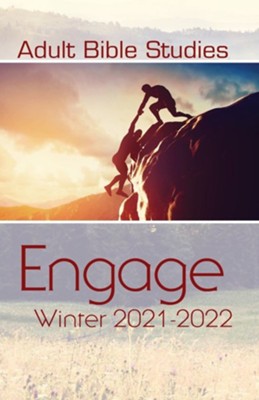 Hundreds of thousands of people each week have transformative encounters with God through Adult Bible Studies-Bible-based, Christ-focused Sunday school lessons and midweek Bible studies endorsed by the Curriculum Resources Committee of the The United Methodist Church. In 2020, we reintroduced printed focal Bible passages in both the Student and Teacher books. Lessons follow the church seasons, including Advent and Lent, and include suggestions for developing spiritual practices to help nurture your faith.Published quarterly, each week's Student Book lesson lists background Scripture, features key verses, provides reliable and relevant biblical explanation and application, and more, in a readable font size that is accessible to everyone.

Visit AdultBibleStudies.com and sign up for the FREE weekly newsletter to automatically receive the FREE Current Events Supplement and other information about these resources and more!

▼▲
Gary Thompson is a retired ordained elder in the Mississippi Annual Conference of The United Methodist Church. Gary received his undergraduate degree from Delta State University in Cleveland, Mississippi, and an MRE from Southern Seminary in Louisville, Kentucky. He did additional study at New Orleans Seminary and Memphis Theological Seminary. He earned a DMin in leadership development from Princeton Theological Seminary. Gary enjoys traveling domestically and internationally. He is most proud of his wife, Robin; three children; and seven grandchildren. You can e-mail Gary at drgaryt@gmail.com, follow him on Twitter at @drgaryt, or read his blog at transformativechurch. blogspot.com.

▼▲
I'm the author/artist and I want to review Adult Bible Study Student Winter 2021-22.
Back