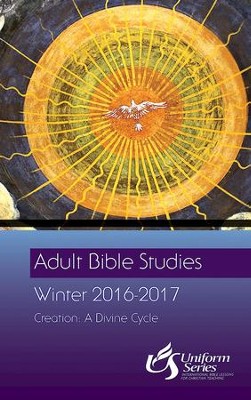 Creation: A Divine Cycle
Luke | Psalms | Galatians
This winter, lessons in Adult Bible Studies follow the theme, "Creation: A Divine Cycle." With the advent of the Savior by the power of the Holy Spirit, God set in motion the fulfillment of the divine plan of salvation. Through Luke's Gospel, several psalms, and the epistle to the Galatians, we explore God's ongoing actions in blessing and reconciling the whole creation. The student book writer is Kevin Baker; Brian Russell is the writer for the teacher book.

The Savior Has Been Born
The four lessons in this unit are developed from the Gospel of Luke. Lesson One explores how Mary, a virgin, received and joyfully accepted the announcement that she had been highly favored by God to give birth to God's Son. Lesson Two looks at the affirmation of Elizabeth, Mary's cousin, to her news. Lesson Three focuses on John's mission as the forerunner of the Savior. The Christmas Day lesson deals with the birth of Jesus and the circumstances and events pursuant to it.

Praise From and for God's Creation
The five lessons in this unit employ five different psalms. Several psalms emphasize praise for God that emanates from creation itself. Others invite us to praise God for creation.

The Birthing of a New Community
This unit has four lessons from Galatians that show us how God's creative process can be seen through the birthing of a new faith community with Jesus Christ as its foundation. The lessons address the importance of spiritual freedom, cooperation, and righteous living in building and maintaining the community.

Register for the Forums and you can post and read comments about the lessons from other readers.

▼▲
Kevin Baker has served as a United Methodist pastor for the past 18 years. He is currently pastor of First United Methodist Church in Graham, N.C. Born in Oklahoma City, OK, he spent his early years living in different places as the son of a Nazarene pastor. Kevin has an M.Div from Duke Divinity School. Upon graduation he served three and a half years at the Creswell UMC Charge in eastern NC. During his pastorate in Creswell, NC, he served as the Vice-President of the Human Relations Council and taught courses on racism and race relations. It was there that he began to cultivate what would become a lifetime commitment to multicultural, multiracial ministry.
In 1997, he was one of two founding pastors appointed to help start a new, multicultural and bilingual congregation in Durham. From August 2004 to June of 2011, Kevin was appointed to serve as the lead pastor of this ministry and helped to lead the church in a missional merger with a local African American congregation, creating a new ministry that today is known as New Creation UMC in Durham. Beginning in July 2011, Kevin was appointed to his current church in Graham where he continues to enjoy joining hands with a congregation that is enthusiastic about mission, outreach, and evangelism.
In addition to being a full time pastor, Kevin also has served as adjunct faculty for Duke Divinity School has experience with coaching, facilitating outreach and evangelism, integrating technology in ministry, and has taught Course of Study for Pastors at both Duke and a new Central American Pastor’s School in El Salvador. He has written for The Christian Century, The General Board of Discipleship, Upper Room Books, Abingdon Press, and other curriculum for the United Methodist Publishing House. He enjoys reading, writing, playing basketball, and riding his motorcycle. He and his wife, Denise, have three children: Sarah, Zachary, and Rachel.