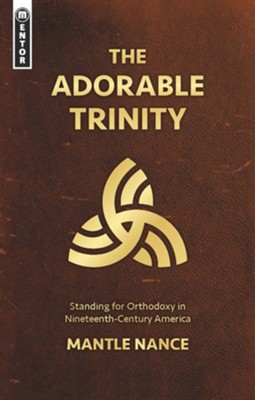 The Adorable Trinity: Standing for Orthodoxy in Nineteenth-Century America

If you love church history and desire to know our Triune God in a more glorious fashion, then The Adorable Trinity is a must read. I highly recommend it solely for the benefit of worshipping our majestic God, who has existed forever – Father, Son and Spirit – in constant love, communion, and glorious unity of essence and purpose.

There is a certain lineage of southern Presbyterian theologians who, whatever their defects, nurtured a doctrine and devotion so intensely, pervasively, and uniquely trinitarian that they have long stood in need of closer study. What can account for this revival of excitement about the doctrine of the Trinity at this particular time and place? This book unlocks at least one part of the secret: these theologians and pastors knew themselves to be contending against an organized unitarian movement. By establishing this polemical context for their work, and then reading them sympathetically against this background, Nance has shed much light on an often ignored phase of American theological history.

This book is fascinating as to the historical details and heart–warming as to the defense of the ‘Adorable Trinity.’

Mantle Nance’s study of the controversy in the Old South between Trinitarians and Unitarians is historically and theologically marked by careful scholarship and, although committed to the supernaturalism of Trinitarian belief, seeks to be fair and judicious throughout. Far from being a good, but dusty, relic of past concerns, it  touches on many of the most crucial issues facing human thought and destiny today (or at any time). It is very much alive; a penetrating word for our times…

This book is a fascinating look at a neglected chapter in the history of the old South. The author offers an inspiring account of southern theologians’ convincing arguments that the Trinity is foundational to every aspect of Christian faith and practice. The book will be a delight to anyone interested in this era of America history.

A wonderful story of the triumph of the gospel through three faithful servants, who were giants of the southern Presbyterian church in the 19th Century. This book combines history and theology in a clear, accessible and edifying way.  It reminds us why the biblical doctrine of the Trinity is central to the Christian faith and vital for our salvation.  Even more, this work speaks to the heart, drawing believers in Christ to greater adoration of the Triune God.

A timely, careful, well–documented study of Southern Presbyterian orthodoxy on the doctrine of the Trinity. It is thoughtful, clear and occasionally bold where it needs to be. Nance’s point is that we need to recover a robustly Trinitarian shape to ministry in all of its aspects. And he is correct. The contents of this fine book will do much to bring a much–needed  reformation to the twenty–first century church.

With interest in the Trinity blossoming today broadly in both academia and practical ministry, Mantle Nance’s contribution to the field is most welcome. He introduces us to the labors of a forgotten portion of Christendom on this provocative subject — the nineteenth–century theologians of Old Columbia Seminary—James Henley Thornwell, Thomas Smyth, and Benjamin Morgan Palmer.  Tossed out with the bathwater of sectionalism, slavery, and Civil War, their almost disremembered struggles against the Unitarian rationalism of their day make the Columbians a fascinating read on so many levels.  Nance does not spare them where they fall short of their own Trinitarian belief.  But neither does he fail to grasp the creative core of their insight: that the Trinity is not an abstract doctrinal loci but rather an immense dynamus for both faith and life.

▼▲
I'm the author/artist and I want to review The Adorable Trinity: Standing for Orthodoxy in Nineteenth-Century America.
Back
×