Skip to main content
SPRING CYBER EVENT STARTS NOW: And it's a really BIG deal! Up to 88% off through 5/24>
Adapt or Die: Leadership Principles from an American General - eBook
By: Lt. Genl Rick Lynch, Mark Dagostino
Stock No: WW40277EB 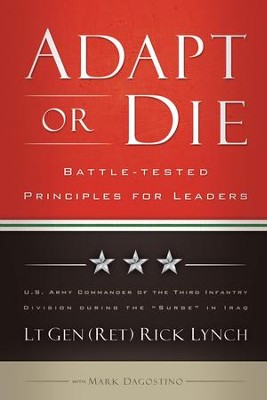 Adapt or Die: Leadership Principles from an American General - eBook

▼▲
Many authors write about leadership, but few have lived it at the level of Lt. Gen. Rick Lynch. The world is in desperate need of authentic, reliable leaders at all levels of society. Twenty-first-century leaders face unprecedented challenges and rapid change, and leaders with a keen ability to adapt are in high demand.

Sharing stories from the front and insights born from overcoming adversity on both the battlefield and in the boardroom, Lynch reveals impactful leadership principles ranging from earning respect and working effectively with diverse teams to adapting to new technology and laying a foundation of trust built upon integrity. With refreshing directness, he shows readers how to make wise calls and gain the confidence they need to lead in our ever-changing world.

▼▲
Lt. Gen. Rick Lynch has commanded at all levels of the Army, from company (100 soldiers) to Corps (65,000 soldiers) to commander of all US Army installations (120,000 civilian employees and soldiers worldwide). He spent over thirty months in Iraq, including fifteen months as one of the leaders of the 2007 Surge and recently accepted the position as executive director of the University of Texas at Arlington Research Institute. He and his wife of thirty years, Sarah, live in Texas.

Mark Dagostino is a New York Times bestselling coauthor and former senior writer for People magazine. He wrote Courage to Stand with Minnesota Governor Tim Pawlenty, and is the co-author of Rudy: My Story with Notre Dame legend Daniel "Rudy" Ruettiger. He lives in New Hampshire.

▼▲
I'm the author/artist and I want to review Adapt or Die: Leadership Principles from an American General - eBook.
Back
Back