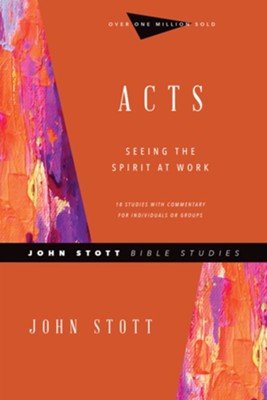 ▼▲
Study Scripture with John Stott The Spirit moved in dramatic ways in the early church. The gospel was preached, thousands were added to their number, many were healed, and the good news about Jesus was spread across continents. Covering the exciting action of the Spirit in the years just following Jesus' life on earth, this study will open your eyes to the Spirit's power in the past and present and help you apply the riches of Scripture to your own life. John Stott was one of the world's leading and most-loved Bible teachers and preachers. In this Bible study guide you can explore Scripture under his guidance, enhancing your own in-depth study with insights gained from his years of immersion in God's Word.

▼▲
John Stott served as rector of All Souls Church in London and was honored by Time magazine in 2005 as one of the "100 Most Influential People in the World." His many books, including Basic Christianity and The Cross of Christ, have sold millions of copies around the world and in dozens of languages. Phyllis J. Le Peau worked with InterVarsity Christian Fellowship for over two decades in St. Louis and the Chicago metro area. She is the author or coauthor of several Bible study guides, including Ephesians, Women of the New Testament, and Grandparenting in the LifeGuide Bible Studies series. She and her husband, Andy, have four married children and thirteen grandchildren.

▼▲
I'm the author/artist and I want to review Acts: Seeing the Spirit at Work - eBook.
Back
Back