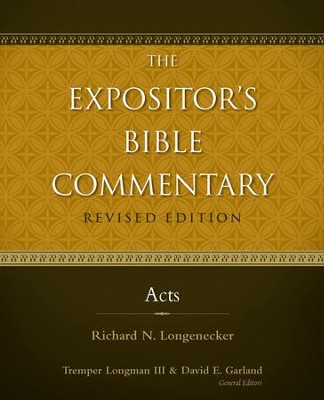 Continuing a Gold Medallion Award-winning legacy, this completely revised edition of The Expositor’s Bible Commentary series puts world-class biblical scholarship in your hands. Based on the original twelve-volume set that has become a staple in college and seminary libraries and pastors’ studies worldwide, this new thirteen-volume edition marshals the most current evangelical scholarship and resources. The thoroughly revised features consist of: &bull; Comprehensive introductions &bull; Short and precise bibliographies &bull; Detailed outlines &bull; Insightful expositions of passages and verses &bull; Overviews of sections of Scripture to illuminate the big picture &bull; Occasional reflections to give more detail on important issues &bull; Notes on textual questions and special problems, placed close to the texts in question &bull; Transliterations and translations of Hebrew and Greek words, enabling readers to understand even the more technical notes &bull; A balanced and respectful approach toward marked differences of opinion

Richard N. Longenecker is Ramsey Armitage Professor of New Testament, Wycliffe College, University of Toronto. He receivec the B.A. and M.A. degrees from Wheaton College and Wheaton Graduate School of Theology, respectively, and the Ph.D. from New College, University of Edinburgh. His principal publications include Paul, Apostle of Liberty (1964), The Christology of Early Jewish Christianity (1970), The Ministry and Message of Paul (1971), Biblical Exegesis in the Apostolic Period (1975), “The Acts of the Apostles” in The Expositor’s Bible Commentary (1981), and The New Testament Social Ethics for Today (1984).

▼▲
I'm the author/artist and I want to review Acts / Revised - eBook.
Back
Back