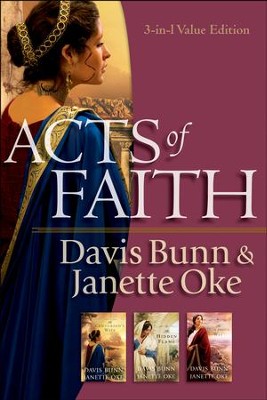 Set in first-century Palestine, Alban, a Roman soldier and his wife were hired by the  governor to find out how a rabbi died and where his missing body is. The rumor was that a political execution had gone bad. Will they uncover the truth?

After she lost everything, Abigail found a new purpose in life when she began to follow the Messiah. With the increase in persecutions, she doubted her decision. As the group of followers known as The Way grew, they encountered even more resistance from the religious elite who wanted this new sect eliminated. Will Abigail's faith help her continue this tough road?

Julia and her mother were introduced to the followers of The Way and became part of the new community of believers. Jacob was worried about his Christian beliefs would affect his job as a caravan guard who protected the wealthy merchant's caravans of undercover transports of a valuable commodity known as Frankincense. Secretly he delivered letters to the growing communities of believers. When Julia and Jacob met, there was mistrust. What happens when he reveals his faith to her?

▼▲
Three Bestselling Novels in One

The Acts of Faith trilogy is a sweeping saga set in Israel and beyond during the months and years immediately following the death and resurrection of Jesus of Nazareth. Authors Davis Bunn and Janette Oke have woven an intriguing story featuring compelling fictional characters who interact with the men and women who were central to the rise of Christianity. Amid religious, political, and cultural persecution, these courageous few must shape and preserve a faith that will stand the test of time.

▼▲
Davis Bunn is the award-winning author of numerous national bestsellers. He and his wife, Isabella, divide their time between England and Florida. Learn more at www.davisbunn.com.

Bestselling author Janette Oke is celebrated for her significant contribution to the Christian book industry. Janette and her husband, Edward, live in Alberta, Canada.