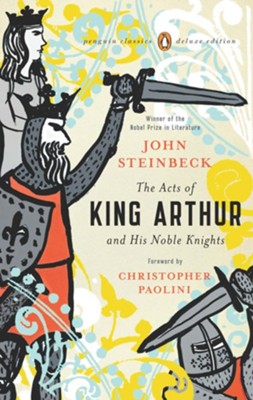 ▼▲
John Steinbeck's retelling of Malory's beloved Arthurian stories will capture the attention and imagination of legions of Steinbeck fans, including those who love Arthurian romances, as well as countless readers of science fiction and fantasy literature. Featuring the icons of Arthurian legend-including King Arthur, Merlin, Morgan le Fay, the incomparable Queen Guinevere, and Arthur's purest knight, Sir Lancelot of the Lake-these enduring tales of loyalty and betrayal in the time of Camelot flicker with the wonder and magic of an era past but not forgotten. 416 pages, softcover.

▼▲
Steinbeck's only work of fantasy literature—in a  deluxe edition with a foreword by Christopher Paolini, New York Times bestselling author of Eragon, Eldest and Brisingr

Malory’s Le Morte d’Arthur was the first book that John Steinbeck truly enjoyed reading as a child. Fascinated by Arthurian tales of adventure, knighthood, honor and friendship, in addition to the challenging nuances of the original Anglo-Saxon language, Steinbeck set out to render these stories faithfully and with keen animation for a modern audience. Here then is Steinbeck’s modernization of the adventure of King Arthur and the Knights of the Round Table, featuring the icons of Arthurian legend—including King Arthur, Merlin, Morgan le Fay, the incomparable Queen Guinevere, and Arthur's purest knight, Sir Lancelot of the Lake.

These enduring tales of loyalty and betrayal in the time of Camelot flicker with the wonder and magic of an era past but not forgotten. Steinbeck's retelling will capture the attention and imagination of legions of Steinbeck fans, including those who love Arthurian romances, as well as countless readers of science fiction and fantasy literature.

This edition features a new foreword by Christopher Paolini, author of the number-one New York Times bestselling novels Eragon, Eldest, and Brisingr. It also includes the letters John Steinbeck wrote to his literary agent, Elizabeth Otis, and to Chase Horton, the original editor of this volume.

John Steinbeck, born in Salinas, California, in 1902, grew up in a fertile agricultural valley, about twenty-five miles from the Pacific Coast. Both the valley and the coast would serve as settings for some of his best fiction. In 1919 he went to Stanford University, where he intermittently enrolled in literature and writing courses until he left in 1925 without taking a degree. During the next five years he supported himself as a laborer and journalist in New York City, all the time working on his first novel, Cup of Gold (1929).

After marriage and a move to Pacific Grove, he published two California books, The Pastures of Heaven (1932) and To a God Unknown (1933), and worked on short stories later collected in The Long Valley (1938). Popular success and financial security came only with Tortilla Flat (1935), stories about Monterey’s paisanos. A ceaseless experimenter throughout his career, Steinbeck changed courses regularly. Three powerful novels of the late 1930s focused on the California laboring class: In Dubious Battle (1936), Of Mice and Men (1937), and the book considered by many his finest, The Grapes of Wrath (1939). The Grapes of Wrath won both the National Book Award and the Pulitzer Prize in 1939.

Early in the 1940s, Steinbeck became a filmmaker with The Forgotten Village (1941) and a serious student of marine biology with Sea of Cortez (1941). He devoted his services to the war, writing Bombs Away (1942) and the controversial play-novelette The Moon is Down (1942).Cannery Row (1945), The Wayward Bus (1948), another experimental drama, Burning Bright(1950), and The Log from the Sea of Cortez (1951) preceded publication of the monumental East of Eden (1952), an ambitious saga of the Salinas Valley and his own family’s history.

The last decades of his life were spent in New York City and Sag Harbor with his third wife, with whom he traveled widely. Later books include Sweet Thursday (1954), The Short Reign of Pippin IV: A Fabrication (1957), Once There Was a War (1958), The Winter of Our Discontent (1961),Travels with Charley in Search of America (1962), America and Americans (1966), and the posthumously published Journal of a Novel: The East of Eden Letters (1969), Viva Zapata!(1975), The Acts of King Arthur and His Noble Knights (1976), and Working Days: The Journals of The Grapes of Wrath (1989).

Steinbeck received the Nobel Prize in Literature in 1962, and, in 1964, he was presented with the United States Medal of Freedom by President Lyndon B. Johnson. Steinbeck died in New York in 1968. Today, more than thirty years after his death, he remains one of America's greatest writers and cultural figures.

Christopher Paolini is the New York Times-bestselling author of Eragon, Eldest and Brisingr.

▼▲
"Steinbeck embellishes Malory's spare language with a richness of detail that transforms the vision, makes it no one's but Steinbeck's."
-John Gardner, The New York Times Book Review

▼▲
I'm the author/artist and I want to review The Acts of King Arthur and His Noble Knights: (Penguin Classics Deluxe Edition) - eBook.
Back
Back