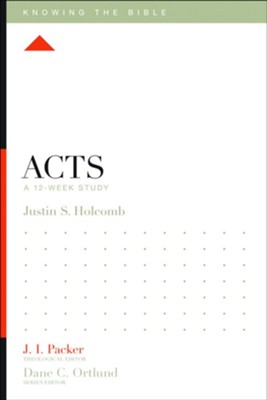 The book of Acts chronicles some of the most important events in Christian history: the scattering of Jesus's disciples across the known world, the coming of the Holy Spirit, the birth of the early church, and more.

Plumbing the theological depths, this guide explains the biblical text with clarity and passion - helping us understand the history-shaping events that took place in the years following Christ's ascension. 12 weeks.

Designed for individuals and small groups alike, this 12-week study through the book of Acts explores the history of the early church after Christ’s ascension.

Justin S. Holcomb (PhD, Emory University) is an Episcopal priest and teaches theology at Gordon-Conwell Theological Seminary and Reformed Theological Seminary. He serves on the boards of GRACE (Godly Response to Abuse in Christian Environments) and REST (Real Escape from the Sex Trade). Justin and his wife, Lindsey, live in Orlando, Florida, with their two daughters.

J. I. Packer (DPhil, Oxford University) serves as the Board of Governors’ Professor of Theology at Regent College. He is the author of numerous books, including the classic best seller Knowing God. Packer served as general editor for the English Standard Version Bible and as theological editor for the ESV Study Bible.

Dane C. Ortlund (PhD, Wheaton College) is chief publishing officer and Bible publisher at Crossway. He serves as an editor for the Knowing the Bible series and the Short Studies in Biblical Theology series, and is the author of several books, including Gentle and Lowly and Edwards on the Christian Life. He is an elder at Naperville Presbyterian Church in Naperville, Illinois. Dane lives with his wife, Stacey, and their five children in Wheaton, Illinois.

About the "Knowing the Bible" Series

Over the course of 12 weeks, these studies explore books of the Bible and: