We are OPEN and SHIPPING - click here for shipping estimates
PRE-SUMMER CYBER SALE EXTENDED thru 6/1 ~ Over 2,500 items up to 90% off
Action Bible Heroes Card Collection 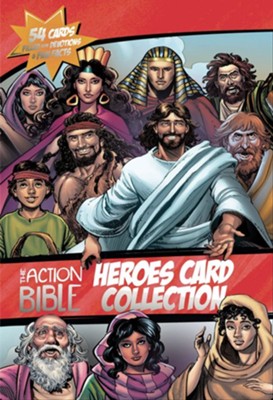 Flip each card over to find more exciting artwork and a brief biography that will truly take children on their own adventure of discovering each Bible hero and finding how they can connect to God from the hero’s story. Interesting facts, engaging questions, and references to finding more information about each hero in The Action Bible and The Action Bible Storybook (when applicable) are included. An additional card is provided with ideas to keep kids engaged.

Packaged beautifully in one, easy-to-use box, these cards will be treasured by families for years as they study and engage personally with the heroes from God’s Word.

▼▲
THE AUTHOR
The Action Bible devotions and other biblical content were developed by a team of writers at David C Cook.

▼▲
I'm the author/artist and I want to review Action Bible Heroes Card Collection.
Back
×