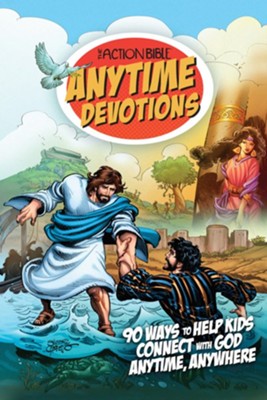 Illustrated By: Sergio Cariello
More in Action Bible Series
David C Cook / 2020 / ePub
Write a Review
This product will be released on 08/13/21
Email me when this product is available.
Stock No: WW103003EB

▼▲
As today’s kids face a culture of comparison, temptation, and bullying, they need to know God is with them and for them, and He has already proven His power to help them overcome. The Action Bible Anytime Devotions invites kids ages 8–12 to connect with God by exploring Bible truth and applying it to their real-world struggles—anytime, anywhere, and as often as they need encouragement.

All-new original illustrations engage kids in vivid scenes from Bible stories, while each of the 90 devotions tackles a relevant topic such as anger, honesty, and identity. Every action verse, practical question, life application, and simple prayer helps build their faith in God and strengthen their character. So when they’re confronted with confusing issues or challenging choices, kids can count on God’s promises to hold true for them no matter what.

Families who love The Action Bible will perfectly relate to The Action Bible Anytime Devotions as they dig deeper into God’s Word and experience the confidence that can only come from knowing and following Him.

▼▲
Born in Brazil, Sergio Cariello’s accomplished art career began at age 11 by drawing a regular comic strip for his city’s newspaper. He spent many childhood hours poring over The Picture Bible (Portuguese edition), never dreaming that decades later he would illustrate the updated edition of The Action Bible. Sergio has worked for Marvel Comics and DC Comics, and has illustrated Batman, Spider-Man, Superman, Iron-Man, Wonder Woman, Fantastic Four, The Lone Ranger, and dozens more comic book characters. He loves to fly drones and attend comic book conventions to stay connected with his peers and fans, but he especially enjoys telling people about Jesus through his illustrations and teaching God's Word when he travels. At his local church, he leads worship (singer, composer, and acoustic guitar player). He lives in Florida with his wife, Luzia, and their two dogs, Grace and Lilly.

▼▲
I'm the author/artist and I want to review The Action Bible Anytime Devotions: 90 Ways to Help Kids Connect with God Anytime, Anywhere - eBook.
Back
Back