Skip to main content
SPRING CYBER EVENT STARTS NOW: And it's a really BIG deal! Up to 88% off through 5/24>
Acting the Miracle: God's Work and Ours in the Mystery of Sanctification
Edited By: John Piper, David Mathis, Russell D. Moore, Ed Welch
By: Kevin DeYoung
Stock No: WW537875 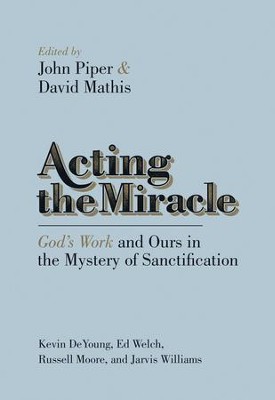 Acting the Miracle: God's Work and Ours in the Mystery of Sanctification

▼▲
Everybody is tempted by sin, but God helps believers overcome it through the miracle of sanctification. Piper and Mathis have collected a wealth of wisdom and personal insights from noted leaders in order to encourage believers to strive for holiness---without falling into the trap of legalism. A timely, practical resource for godly living. 176 pages, softcover from Crossway.

We all struggle with sin, whether its pride, lust, anger, or something else. In this gospel-centered resource, five church leaders offer practical advice for "acting" the miracle of sanctification God has already worked within us.

Kevin DeYoung (PhD, University of Leicester) is the senior pastor at Christ Covenant Church in Matthews, North Carolina, and assistant professor of systematic theology at Reformed Theological Seminary, Charlotte. He serves as board chairman of the Gospel Coalition and blogs at DeYoung, Restless, and Reformed. He is the author of several books, including Just Do Something; Crazy Busy; and The Biggest Story. Kevin and his wife, Trisha, have nine children.

Russell Moore (PhD, The Southern Baptist Theological Seminary) is the eighth president of the Ethics & Religious Liberty Commission of the Southern Baptist Convention, the moral and public policy agency of the nation's largest Protestant denomination. A widely-sought commentator, Dr. Moore has been called "vigorous, cheerful, and fiercely articulate" by the Wall Street Journal. He is the author of several books, including Onward, The Kingdom of Christ, Adopted for Life, and Tempted and Tried, and he blogs regularly at RussellMoore.com and tweets at @drmoore. He and his wife, Maria, have five sons.

Edward T. Welch (PhD, University of Utah) is a counselor and faculty member at the Christian Counseling & Educational Foundation. He has been counseling for more than 35 years and has written extensively on the topics of depression, fear, and addictions. His books include When People Are Big and God Is Small, Crossroads: A Step-by-Step Guide Away From Addiction, Running Scared: Fear, Worry and the God of Rest, Shame Interrupted, and Side by Side. He blogs regularly at CCEF.org.

▼▲
I'm the author/artist and I want to review Acting the Miracle: God's Work and Ours in the Mystery of Sanctification.
Back
Back