Skip to main content
SPRING CYBER EVENT STARTS NOW: And it's a really BIG deal! Up to 88% off through 5/24>
Across an Untried Sea: Discovering Lives Hidden in the Shadow of Convention and Time - eBook
By: Julia Markus
Stock No: WW37077EB 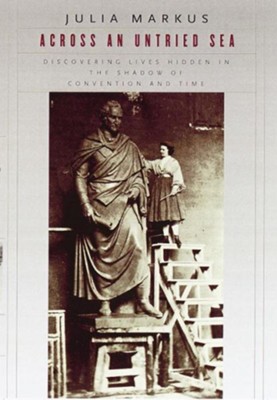 Across an Untried Sea: Discovering Lives Hidden in the Shadow of Convention and Time - eBook

▼▲
From the much acclaimed author of Dared and Done: The Marriage of Elizabeth Barrett and Robert Browning, a new book that retrieves the lives of Victorian women--writers, actresses, poets, journalists, sculptors, and social reformers--celebrated in their day but forgotten in ours.
Julia Markus focuses in particular on the American Charlotte Cushman, the most famous English-speaking actress of her day, and on the Scottish Jane Welsh Carlyle, a brilliant London hostess who gave up private ambition to become the wife of her friend Thomas Carlyle.

Charlotte Cushman became an international star on the New York and London stage, and her Romeo and Hamlet were sensations. An independent woman with shrewd business sense who made her own fortune and supported her entire family, she dressed like a man from the waist up and had a succession of female lovers, each one of whom she planned to live with for life, each of whom she 'married.'

Jane Welsh Carlyle, literary hostess, unparalleled letter writer and chronicler of her times--who, after a passionate youthful love affair, resolved to marry genius or not at all--became the wife of the revered and lionized philosopher Thomas Carlyle, a difficult, demanding man with whom she had a sexless marriage.

Interweaving the worlds of Charlotte Cushman and Jane Carlyle--the worlds of expatriate Rome, literary London, New York, and St. Louis--Markus gathers together a number of interrelated and renowned women who were relegated in the public eye to the position of Virgin Queen (no matter how much married) or Old Maid, but who were, in fact, privately leading vibrant, independent, sexual lives. Among them: Matilda Hays, translator of George Sand; Harriet Hosmer, who resolved to become the world's first professional woman sculptor; and Emma Stebbins, whom Cushman 'married' and who created the Bethesda Fountain in New York's Central Park. Here, too, are the people who sought the friendship of Cushman and Carlyle, including Ralph Waldo Emerson, Horace Mann, Elizabeth Peabody, President Lincoln's Secretary of State William H. Seward, Geraldine Jewsbury, and Rosa Bonheur.
Making use of letters, diaries, newspaper accounts, and journals of the day, many of them overlooked and unpublished, Julia Markus rediscovers lives forgotten in the shadows of convention and shows how these remarkable women--seemingly separated by nationality, class, and sexual inclination--met, formed alliances, and influenced one another, forging changes in themselves and in their time.

▼▲
Julia Markus received her B.A. and M.A. degrees in comparative literature from Boston University, and her Ph.D. in Victorian literature from the University of Maryland. She is a professor of English and Director of Creative Writing at Hofstra University, and is the author of five novels and a biography of the Brownings' marriage, Dared and Done, as well as the editor of two volumes of Elizabeth Barrett Browning's poetry. She is a recipient of both a National Endowment for the Arts and a National Endowment for the Humanities grant. She researched part of Across an Untried Sea while a fellow at Hawthornden Castle, outside Edinburgh. She lives in Connecticut and New York.

▼▲
I'm the author/artist and I want to review Across an Untried Sea: Discovering Lives Hidden in the Shadow of Convention and Time - eBook.
Back
Back