We are OPEN and SHIPPING - click here for shipping estimates
PRE-SUMMER CYBER SALE EXTENDED thru 6/1 ~ Over 2,500 items up to 90% off
Scars Across Humanity: Understanding and Overcoming Violence Against Women
By: Elaine Storkey 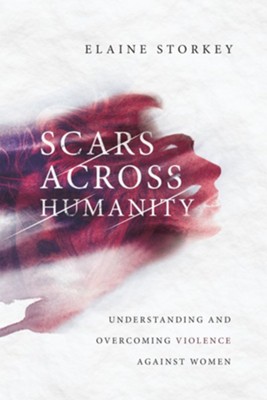 Scars Across Humanity: Understanding and Overcoming Violence Against Women

Acts of violence against women produce more deaths, disability, and mutilation than cancer, malaria, and traffic accidents combined. How and why has this violence become so prevalent?

Elaine Storkey offers a rigorously researched overview of this global pandemic, from female infanticide and child brides to domestic abuse, prostitution, rape, and honor killings. This sobering study explores how violence is structured into the very fabric of societies around the world, providing a window into the real issues that we are up against as we try to find appropriate responses to the continual violence.

I have read nothing quite like Elaine Storkey’s book, Scars Across Humanity. It tells the story of violence against women in today’s world. The book is very well researched and accessible; moreover, it is spine-chilling. As I sat with the book in hand after reading it I felt both pleased that someone had so powerfully told this awful story and depressed by what I had read.

This book has great weight, not only because of the important facts covered, but also because of who wrote it. Storkey is a philosopher, sociologist, theologian and BBC broadcaster who has taught in several of the most prestigious universities in England. She has been a member of the General Synod of the Church of England since 1987. She succeeded John Stott as the executive director of the London Institute for Contemporary Christianity in 1991. In 1997 she was appointed president of Tearfund, a UK- based evangelical aid and relief organization.

After an introductory chapter, the following eight chapters deal with specific forms of violence against women in the chronological order that they are most likely to occur in a woman’s life: abortion of female foetuses and infanticide, genital mutilation, early enforced marriage, honor killing, domestic violence, trafficking and prostitution, rape, and the abuse of women in war.

Then follow four chapters exploring the various explanations that have been given for these inexcusable realities. First, Storkey gives a good hearing to evolutionary biology as the root cause, but in the end finds it wanting.  It fails to acknowledge that human beings are free agents who can decide how they behave. Second, patriarchy, the belief that men should rule over women, is considered as the cause. She agrees this is a pernicious idea but again concludes that, as free moral agents, human beings are not bound to perpetuate patriarchy and its abuses. Third, two chapters consider the argument that religion is to blame. The first chapter is on religion in general and Islam in particular as the cause, and the second is specifically on Christianity. She concedes that most religions are conservative and teach the subordination of women, although often at the same time they speak of the worth and dignity of women. Nevertheless she points out that, in today’s world, most religions include voices advocating for freedoms for women. Islam is no exception; there are indeed Muslim feminists. This is for them a hard path to take because the Qur’an and the Sunnah (the record of the life, teachings, and deeds of Muhammad) explicitly give men authority over women and allow polygamy. What is more, they can be read to give permission to men to beat their wives, to condone rape in certain circumstances, to permit the marriage of prepubescent girls, and to encourage honor killings.

Dr. Storkey says that, as an evangelical Christian, she found the chapter on Christianity the hardest to write. She has to acknowledge that across the ages Christian theologians have taught the superiority of men and the inferiority of women and have often spoken in misogynistic ways. Even today, many evangelicals dogmatically assert that the Bible teaches the permanent subordination of women, usually in euphemistic and obfuscating terminology. Nevertheless, Storkey points out, Christianity has never endorsed any of the appalling abuses of women she speaks about in her book, and the voices for change are growing louder. A pressing issue for those many evangelicals who teach the subordination of women, she says, is domestic violence. Telling men that the Bible gives them leadership in the home encourages and legitimates controlling and abusive behavior in needy and insecure men. When women find themselves in this situation, they seldom find support when they turn to a male pastor. Holding to the belief that the man is the head of the home, some pastors place women in dangerous circumstances.

What I found most staggering in Storkey’s book was the extent of the abuse against women. One in three women in the world may suffer abuse or violence in their lifetime. Possibly two million female foetuses are aborted a year; one hundred and forty million women have been genitally mutilated; over twenty million people are trafficked each year; one hundred and forty million girls have been forced into marriage in adolescence; one in four women in Western countries will experience domestic violence, and the figures are much higher in other parts of the world. It is estimated that thirty million women were raped in

The endemic violence and injustices perpetuated against women are hard to believe, but even harder to accept is that all too often women themselves are perpetrators of this violence. For example, it is almost always women who mutilate young girls, and women are often involved in trafficking and running brothels and often complicit in honor killings. The involvement of women in these things is an example of how, in all entrenched social hierarchies, invariably sanctioned by religion, the oppressed internalize and own their unworthiness and subordinate status.

This book is a must read. Buy a copy and pass it on. Better still, buy several copies and give them away. This is a story we Christians need to hear.
---Kevin Giles, author and foundation member of CBE International
---Used with permission from Christians for Biblical Equality

If you want to expand your knowledge on the subject of violence against women, Scars Across Humanity: Understanding and Overcoming Violence Against Women by Elaine Storkey is a must-read. It is an engaging, investigative book packed with history, research, stories, outcomes, and possible solutions to the global issue of violence against women. It covers the past, present, and future of this violence that has many faces in all societies across the globe.

Storkey is respectful and offers perspectives from many different groups and cultures, yet she always defends and makes her point of view very clear. This is not just a good book to read, it is an important book to read because "violence against women is not confined to a specific culture, region or country, or even to particular groups of women within a society. Rather, in all societies, women and girls are subjected to forms of physical, sexual, and psychological abuse."

This book is a well-organized, easy to follow resource. There is an introductory chapter on the global issue of violence against women, defining it as a global pandemic. It examines the denial of violence against women occurring in some countries and the absence of laws protecting women in others. Storkey also discusses how some countries have laws to protect women, but they refuse to implement them. Other times, Storkey submits, women are kept uninformed of their rights. Regardless, the introduction will grab your attention and keep you reading.

Each of the next eight chapters is dedicated to a specific type of violence, most of which do not discriminate between girls or women. The chapters are arranged in a projection of the chronological order that a specific type of violence may happen to a female in her lifetime. Each chapter is full of raw, heart wrenching stories along with well-documented research that spans the globe. The chapters examine selective abortion and infanticide, female genital mutilation, early and enforced marriage, honor killings, domestic violence, trafficking and prostitution, rape, and sexual violence during war.

These chapters trace the history of each type of violence, the present societal and cultural implications of gender-based violence, the consequences of doing nothing for the global future, and necessary actions to overcome and prevent these atrocities against women and girls.

The last four chapters are dedicated to detailing different groups' explanations of gender-based violence, along with each group’s proposed plan for overcoming it. Storkey is respectful to the history and viewpoints of biologists, feminists, Muslims, and Christians. However, she is an egalitarian Christian and she makes it clear that she does not necessarily agree with all of those viewpoints. She respectfully questions and sometimes disagrees with others’ positions, but she deliberately affords those other perspectives proper space. Storkey’s treatment allows for a fair and complete history and gives readers a detailed picture of how various groups are working to eradicate violence against women.

Though she is a Christian, Storkey reports that the chapter dedicated to Christianity was the most difficult chapter for her to write. She is honest and forthright as she argues that the traditions of patriarchy have become synonymous with Christianity in much of the world. She explains how gender inequality in Christianity has contributed to violence against women globally. This chapter also explores the history of women in the church, the recent semi- acceptance of women in leadership roles, complex biblical texts, and examples of great women leaders from both the Hebrew Scriptures and the New Testament.

The last subject of the book is the Christian theology of personhood and the hope that egalitarian Christian initiatives will hold in the fight against gender-based violence. In this last chapter, Storkey argues that true Christian love leaves no room for this scarring violence against women.

I invite you to read this book because:

“The extent of violence against women cannot be underestimated, nor can its consequences. The impact ripples through every area of society; it affects women, children, families, neighborhoods, men, lawmakers, law-enforcers, health providers and so many of our social institutions. It does indeed leave scars on the face of humanity."
---Kimberly Patch, licensed minister.
---Used with permission from Christians for Biblical Equality

▼▲
I'm the author/artist and I want to review Scars Across Humanity: Understanding and Overcoming Violence Against Women.
Back
×