Skip to main content
From Achilles to Christ: Why Christians Should Read the Pagan Classics
By: Louis Markos
Stock No: WW825936 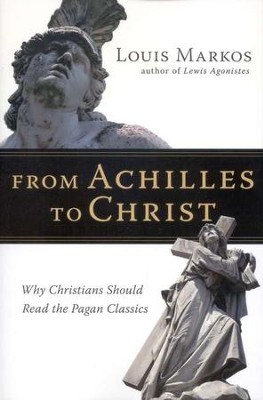 From Achilles to Christ: Why Christians Should Read the Pagan Classics

▼▲
An outstanding introduction to the great classical works from a Christian perspective! From the battles of Achilles and adventures of Odysseus to the feats of Hercules and trials of Aeneas, Markos highlights characters, themes, and symbols; allays fears about reading classical literature; and shows how ancient mythology foreshadows the story of Jesus---the "myth made fact." 276 pages, softcover from InterVarsity.

"The heart of Christianity is a myth which is also a fact." --C. S. Lewis In From Achilles to Christ, Louis Markos introduces readers to the great narratives of classical mythology from a Christian perspective. From the battles of Achilles and the adventures of Odysseus to the feats of Hercules and the trials of Aeneas, Markos shows how the characters, themes and symbols within these myths both foreshadow and find their fulfillment in the story of Jesus Christ--the "myth made fact." Along the way, he dispels misplaced fears about the dangers of reading classical literature, and offers a Christian approach to the interpretation and appropriation of these great literary works. This engaging and eminently readable book is an excellent resource for Christian students, teachers and readers of classical literature.

Louis Markos (Ph.D., University of Michigan) is professor of English at Houston Baptist University, where he teaches classical and English literature. He is a C. S. Lewis scholar and the author of Lewis Agonistes: How C. S. Lewis Can Train Us to Wrestle with the Modern and Postmodern World (Broadman Holman).

. . .through a well-written and scholarly book, Markos has enriched our engagement with the ancient texts and challenged our thinking as Christian readers.

-- Larry Long, Journal of Faith and the Academy, Spring 2008

. . .a great "crash course" on the ancient Greek and Roman myths that every preacher should know.

. . .an accessible and interesting treatment of the great classical works.

▼▲
I'm the author/artist and I want to review From Achilles to Christ: Why Christians Should Read the Pagan Classics.
Back
Back