We are OPEN and SHIPPING - click here for shipping estimates
Your Best Year Ever: A 5-Step Plan for Achieving Your Most Important Goals - unabridged audio book on CD
By: Michael Hyatt 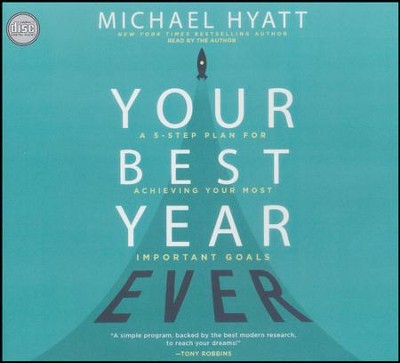 Your Best Year Ever: A 5-Step Plan for Achieving Your Most Important Goals - unabridged audio book on CD

▼▲
Tired of not making progress in your personal aspirations---or so overwhelmed with day-to-day responsibilities that you've forgotten they exist? Best-selling author and former CEO Hyatt's proven, research-driven system will show you how to design your next 365 days in just five hours; triple your chances of achieving your goals; "quit-proof" your plans; and more.

▼▲
We all want to live a life that matters. We all want to reach our full potential. But too often we find ourselves overwhelmed by the day-to-day. Our big goals get pushed to the back burner--and then, more often than not, they get forgotten. New York Times bestselling author Michael Hyatt wants readers to know that it doesn't have to be this way. In fact, he thinks that this is the year readers can finally close the gap between reality and their dreams.

In Your Best Year Ever, Hyatt shares a powerful, proven, research-driven system for setting and achieving goals. Readers learn
how to design their best year ever in just five hours

Anyone who is tired of not seeing progress in their personal, intellectual, business, relationship, or financial goals will treasure the field-tested wisdom found in these pages.

▼▲
Michael Hyatt is the former chairman and CEO of Thomas Nelson Publishers, now part of HarperCollins. He is a New York Times, Wall Street Journal, and USA Todaybestselling author of several books, including Living Forward and Platform: Get Noticed in a Noisy World. Michael's blog is ranked by Google in the top one-half percent of all blogs, with 500,000 unique visitors a month and readers in more than two hundred countries. Michael has been married to his wife, Gail, for thirty-nine years. They have five daughters, three sons-in-law, and eight grandchildren. They live just outside of Nashville, Tennessee. Learn more at MichaelHyatt.com.

▼▲
I'm the author/artist and I want to review Your Best Year Ever: A 5-Step Plan for Achieving Your Most Important Goals - unabridged audio book on CD.
Back
×
Back
×