We are OPEN and SHIPPING - click here for shipping estimates
PRE-SUMMER CYBER SALE EXTENDED thru 6/1 ~ Over 2,500 items up to 90% off
According to the Scriptures
By: Paul Van Buren 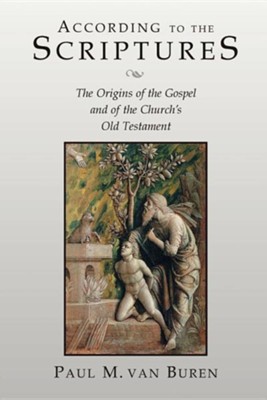 According to the Scriptures

▼▲
What did the earliest Christians mean when they appealed "to the Scriptures"---and how can that serve to further Jewish-Christian dialogue today? Arguing that the disciples' understanding of Good Friday and Easter developed from the account of Isaac in Genesis, van Buren explores the origins of gospel within Israel's scriptures. 147 pages, softcover from Eerdmans.

▼▲
This book calls for a reevaluation of the Old Testament and its role in the Church. It is written out of the conviction that the church needs to claim the Old Testament as its own but also to grant the legitimacy of the Jewish claim on Israel's sacred Scriptures.The author is concerned to debunk several ideas, including the popular notions that Paul was the real inventor of Christianity; that a great gulf exists between the Old Testament and the New Testament; that the early Christians used the Old Testament to prove their already established belief in Jesus; and that Christianity is less credible or valuable if it is seen to depend on Jewish traditions.Van Buren's starting point is an exploration of the meaning and origin of the early Christian confession, "Christ died for our sins in accordance with the scriptures"-particularly the last part of the confession. Van Buren argues that the wording of this early, pre-Pauline gospel confession was the result of a creative application of early Jewish interpretations of scripture, especially of the Binding of Isaac story in Genesis 22.Christians need to affirm the legitimacy of their understanding Christ in light of the Old Testament, argues van Buren, but they also need to grant the legitimacy of the Jewish reading of scripture. The interpretive traditions of both religious communities-Judaism and Christianity-need to be respected.Clearly and elegantly written, this book represents a sensitive ecumenical effort at fostering Jewish-Christian dialogue: a book that both Jews and Christians can read with profit.

▼▲
I'm the author/artist and I want to review According to the Scriptures.
Back
×