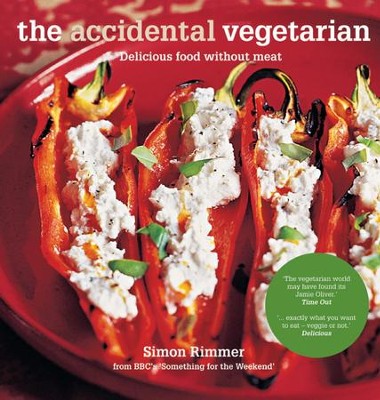 When Simon Rimmer bought a small vegetarian restaurant, he had no idea how to cook. Armed with two cookbooks and heaps of enthusiasm, he and a friend created the best vegetarian restaurant in Manchester, famous for its unusual food and lovely atmosphere. A confirmed meat eater, Simon had to rethink his cooking and has created vegetarian recipes to please even the most dedicated carnivore.

This book is a collection of some of his recipes that are quick to prepare but totally delicious. From good old favourites like macaroni cheese to Simon's more exotic fusion creations such as spicy beetroot and coconut soup, The Accidental Vegetarian will kill the lentil and sandal image of vegetarianism forever!

▼▲
Simon Rimmer set up his vegetarian restaurant 'Greens' in Manchester in 1992 with two recipe books and no formal training. Since then his restaurant has blossomed and received much critical acclaim, and multiple awards. He has since enjoyed great success as a TV chef on such programmes as BBC Good Food Live, A Taste For Travel, Bon Voyage, and This Morning. He is co-presenter of BBC Two's well-loved Sunday morning staple, Something for the Weekend, and presents BBC Two's Recipes for Success, which gives amateur cooks the chance to devise their own menus and run a restaurant for a day. In 2006 he competed in the regional heats of Great British Menu, appearing on the BBC's televised competition to create a four course meal for Her Majesty the Queen to celebrate her 80th birthday. He is author of The Seasoned Vegetarian and The Rebel Cook. His most recent venture, Earle in Hale, has received rave reviews since it opened in 2006.

▼▲
I'm the author/artist and I want to review The Accidental Vegetarian: Delicious Food Without Meat / Digital original - eBook.
Back
Back