Skip to main content
The Accidental Revolutionary: George Whitefield and the Creation of America
By: Jerome Dean Mahaffey
Stock No: WW583917 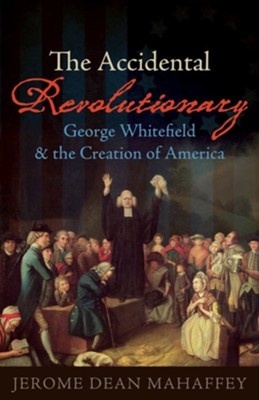 The Accidental Revolutionary: George Whitefield and the Creation of America

Patriots. Founding Fathers. Revolutionaries. For many Americans, the colonial heroes deserve special celebratory reverence. Yet while Washington's leadership, Franklin's writings, and Revere's ride captivate us, the inspiration and influence George Whitefield instilled within the revolutionary spirits of early Americans is regrettably unknown.

In this refreshing biography, Jerome Dean Mahaffey deftly moves beyond Whitefield's colonial celebrity to show how his rhetoric and ministry worked for freedom, situating Whitefield alongside the most revolutionary founders. As this Anglican revivalist traveled among the colonies, he delivered exhilarating sermons deeply saturated with political implications—freedom from oppression, civil justice, communal cooperation. Whitefield helped to encourage in his listeners a longing for a new, uniquely American nationalism.

The Accidental Revolutionary tells the story of this forgotten founder, who may not have realized the repercussions of his words as he spoke them. Now, Mahaffey delicately shows that Whitefield converted colonists not just to Christianity but to a renewed sense of unification that ultimately made possible the American Revolution.

Mahaffey shows how Whitefield's bold challenge to settled religious doctrines and hierarchies helped coax the colonies in the direction of independence.

Mahaffey points out that Whitefield's preaching provided the template for a new way of viewing the world and for Americans to view themselves.... Students of American history and students of the preaching art will benefit from this book.

Mahaffey's book represents a mature reflection on the long-range implications of religious ideals and their unexpected consequences.

▼▲
I'm the author/artist and I want to review The Accidental Revolutionary: George Whitefield and the Creation of America.
Back
Back