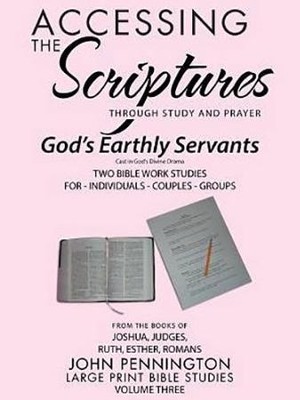 John Pennington is a retired Oklahoma music educator. Performing as a professional musician, he was a member of the Oklahoma City Symphony and the Oklahoma City Lyric Theater Orchestra. Following his teaching years, he owned and operated retail music stores in New Mexico. Retiring a second time, John became active in the Community Bible Study Chapter in Albuquerque where he and his wife, Mary, chaired a couple's class. He served as an assistant teaching director for the Community Bible Study in Murrieta, California. Relocating to North Texas in 2005, the couple established residential Bible study groups in two HOA communities, which continue to the present.

John began writing Bible studies upon relocating in North Texas. His studies generally avoid topical subjects, focusing more on front-to-back studies of each book of the Bible. The simplicity of the studies are instrumental in ensuring attendees to return year after year.

While in California, John became involved with choral music and served as conductor of the Colony Chorale in Murrieta, California. He has served as a church choir director in McKinney, Texas, and is currently an active member of the Stonebriar Community Church Sanctuary Choir of Frisco, Texas.

▼▲
I'm the author/artist and I want to review Accessing the Scriptures: God's Earthly Servants.
Back