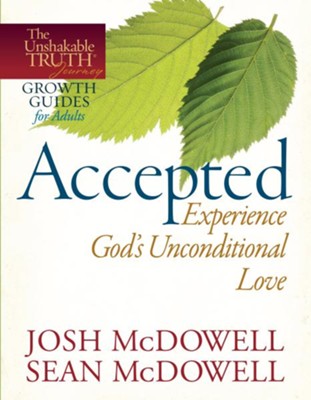 Accepted Experience God's Unconditional Love (The Unshakable Truth Journey growth guide #4) opens up the truth about God s redemption plan. God s becoming human establishes his unconditional acceptance of us, which defines our worth. God values us in spite of our sin. This is the basis on which we gain a high sense of worth.

An entire generation of young Christians along with millions of older believers is confused about what they believe, why they believe it, and how it s relevant.

The Unshakable Truth Journey Growth Guides are a series of 12 courses designed especially for churches, church classes, and small groups. They get to the heart of what being a true follower of Christ means and what knowing Christ is all about. Each five-session guide is based one of 12 core truths of the Christian faith presented in Josh and Sean McDowell s book The Unshakable Truth.

Orthodox, hard-hitting, and relevant, these guides uniquely positioned for today s culture because they highlight how Christianity s beliefs affect relationships; promote a relational, group context in which Christians can experience the teaching in depth; and show believers how they can live out Christianity s central truths before their community and world.

More than just a program, The Unshakable Truth Journey Growth Guides are a tool for long-term change and transformation!

Josh McDowell has been reaching the spiritually skeptical for more than five decades. Since beginning ministry in 1961, Josh has delivered more than 24,000 talks to over 10 million young people in 118 countries. He is the author or coauthor of 120 books, with over 51 million copies distributed worldwide, including Experience Your Bible, The Unshakable Truth®, Evidence for the Historical Jesus, More Than a Carpenter (over 15 million copies printed in 85 languages), and The New Evidence That Demands a Verdict, recognized by World magazine as one of the 20th century's top 40 books. Josh continues to travel throughout the United States and countries around the world, helping young people and adults strengthen their faith and understanding of Scripture. Josh will tell you that his family is his ministry. He and his wife, Dottie, have been married for over 40 years and have four children and five grandchildren.

Sean McDowell is an educator and a popular speaker at schools, churches, and conferences nationwide. He is author of Ethix: Being Bold in a Whatever World, coauthor of Experience Your Bible, The Unshakable Truth®, and Understanding Intelligent Design, and general editor of Apologetics for a New Generation and The Apologetics Study Bible for Students. He is currently pursuing a PhD in apologetics and worldview studies. Sean's website, www.seanmcdowell.org, offers his blog, many articles and videos, and much additional curriculum.

▼▲
I'm the author/artist and I want to review Accepted - Experience God's Unconditional Love - eBook.
Back
Back