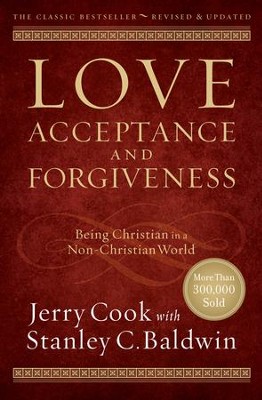 Love, Acceptance, and Forgiveness: Being Christian in a Non-Christian World / Revised - eBook

▼▲
How can the church be a healing force in the world? In this longtime bestseller, now revised and updated, authors Jerry Cook and Stanley C. Baldwin suggest that it is only when believers admit their own brokenness that they can love, accept, and forgive those who are hurting around them and put out the welcome mat to their community. They offer clear teaching about the church in a hurting world. As veteran leaders who practice these principles, they speak from experience, not theory. Through touching true stories and practical guidelines for connecting with fallen, sinful people, Cook and Baldwin announce the good news. The church is not broken, and it is the broken people who can change the world.

▼▲
STANLEY C. BALDWIN is an author and speaker based in the Pacific Northwest. A former periodical editor and book editor, he has authored and coauthored 20 books, including four titles that have sold more than 250,000 copies each: The Kink and I, Your Money Matters, What Did Jesus Say about That?, and Love, Acceptance, and Forgiveness. Baldwin's books have been translated into 11 languages, and he has lectured abroad in Nigeria, India, Japan, Singapore, Fiji, Taiwan, the Philippines, and Australia. He speaks frequently at writers' conferences across the United States. Since 1996, he has also served as director for International Christian Writers.

JERRY COOK (1938-2014) was the former senior pastor of East Hill Church in Gresham, Oregon, where his perspective on the role of the church in the world helped expand East Hill Church from a handful of people to more than 4,500. Jerry also served as an associate pastor at Eastside Foursquare Church in Bothell, Washington, and maintained a teaching and church-consulting ministry. Jerry also authored A Few Things I've Learned Since I Knew It All (coauthored with Stanley Baldwin), Choosing to Love (with his wife, Barbara), and The Monday Morning Church: Out of the Sanctuary and into the Streets. Surrounded by family, Jerry passed away on January 11, 2014.

▼▲
I'm the author/artist and I want to review Love, Acceptance, and Forgiveness: Being Christian in a Non-Christian World / Revised - eBook.
Back
×
Back
×