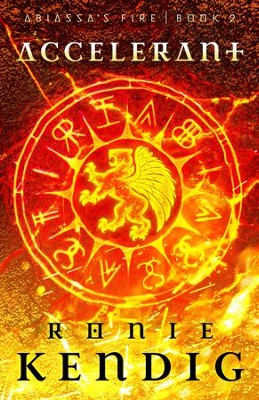 He’ll destroy the world. But first he has to save it.

The Nine Kingdoms bleed. Leaderless, ravaged, the land awaits deliverance from Poired Dyrth’s devastating campaign. But what if one blight can only be cleansed by another?

The promised Fierian is known by many names. Judge. Destroyer. Scourge. And now one other: Haegan, Prince of Seultrie. Once a cripple, now a gifted Accelerant, Haegan can no longer run from the truth. But neither can he be reconciled to it. He knows only one thing for certain: as the only able-bodied heir to the Fire Throne, he must return to the Nine and fight for his people.

But there are insidious forces at work. When reality itself falls into question, Haegan struggles to know where to fight, whom to trust. Caught between duty to his country and duty to the world, Haegan must see clearly enough to choose the right path to save the world.

Ronie Kendig is an award-winning, bestselling author of a dozen novels. She grew up an Army brat. Now, she and her husband, an Army veteran, have an adventurous life in Northern Virginia with their children and two dogs--a Maltese Menace and a retired military working dog, VVolt N629. Ronie's degree in Psychology has helped her pen novels of intense, raw characters. Since launching onto the publishing scene in 2010, Ronie and Rapid-Fire Fiction novels have hit bestseller lists and garnered awards and critical acclaim.
Ronie can be found at www.roniekendig.com, on Facebook (www.facebook.com/rapidfirefiction), Twitter (@roniekendig), and GoodReads.

▼▲
I'm the author/artist and I want to review Accelerant (Abiassa's Fire Series, Book 2).
Back
×