Skip to main content
SPRING CYBER EVENT STARTS NOW: And it's a really BIG deal! Up to 88% off through 5/24>
Abuse of Language Abuse of Power
By: Josef Pieper
Stock No: WW870362X 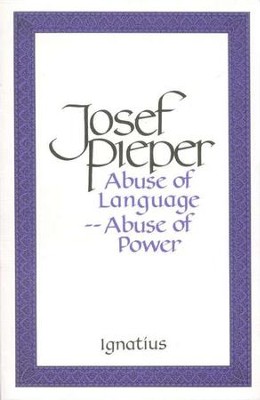 Abuse of Language Abuse of Power

▼▲
One of the great Catholic philosophers of our day reflects on the way language has been abused so that, instead of being a means of communicating the truth and entering more deeply into it, and of the acquisition of wisdom, it is being used to control people and manipulate them to achieve practical ends.Reality becomes intelligible through words. Man speaks so that through naming things, what is real may become intelligible. This mediating character of language, however, is being increasingly corrupted. Tyranny, propaganda, mass-media destroy and distort words. They offer us apparent realities whose fictive character threatens to become opaque. Josef Pieper shows with energetic zeal, but also with ascetical restraint, the path out of this dangerous sitation. We are constrained to see things again as they are and from the truth thus grasped to live and to work. Ignatius Press, 54 pages. Paperback.

▼▲
I'm the author/artist and I want to review Abuse of Language Abuse of Power.
Back
Back