Skip to main content
SPRING CYBER EVENT STARTS NOW: And it's a really BIG deal! Up to 88% off through 5/24>
Abuse of Discretion: The Inside Story of Roe v. Wade
By: Clarke D. Forsythe
Stock No: WW124626 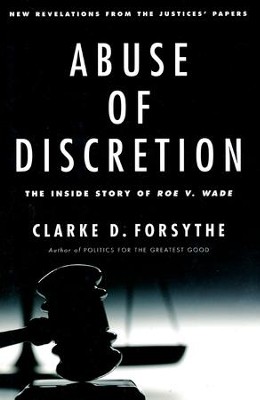 Abuse of Discretion: The Inside Story of Roe v. Wade

▼▲
Written by Senior Counsel Carke D. Forsythe at "Americans United for Life,"Abuse of Discretion charts a pro-life perspective on the mistakes made by the Justices based on case files, oral arguments, and their papers, and also provides a critical examination of the unintended consequences of Roe v. Wade in law, politics, and women's health. 477 pages, indexed, hardcover with dust jacket.

▼▲
Based on 20 years of research, including an examination of the papers of eight of the nine Justices who voted in Roe v. Wade and Doe v. Bolton, Abuse of Discretion is a critical review of the behind-the-scenes deliberations that went into the Supreme Court's abortion decisions and how the mistakes made by the Justices in 1971-1973 have led to the turmoil we see today in legislation, politics, and public health.

The first half of the book looks at the mistakes made by the Justices, based on the case files, the oral arguments, and the Justices’ papers. The second half of the book critically examines the unintended consequences of the abortion decisions in law, politics, and women’s health.

Why do the abortion decisions remain so controversial after almost 40 years, despite more than 50,000,000 abortions, numerous presidential elections, and a complete turnover in the Justices? Why did such a sweeping decision—with such important consequences for public health, producing such prolonged political turmoil—come from the Supreme Court in 1973?

Answering those questions is the aim of this book. The controversy over the abortion decisions has hardly subsided, and the reasons why are to be found in the Justices’ deliberations in 1971-1972 that resulted in the unprecedented decision they issued.

▼▲
Clarke D. Forsythe is Senior Counsel at Americans United for Life. Clarke has a B.A. from Allegheny College, a J.D. from Valparaiso University, and an M.A. in Bioethics from Trinity International University. Clarke has been co-counsel for parties in three U.S. Supreme Court cases, has argued cases before federal and state appellate courts and has testified before Congress and state legislatures. He is the author of Politics for the Greatest Good: The Case for Prudence in the Public Square (InterVarsity Press (IVP), 2009). Clarke and his wife, married for 31 years, have five daughters.

▼▲
“When Roe v. Wade and Doe v. Bolton were first decided, leading constitutional scholars like Paul Freund, John Hart Ely, and Archibald Cox were severely critical. Though unopposed to statutory reform of abortion law, they expressed deep concerns about the legal foundations of those decisions, and the likely consequences of the Supreme Court’s sweeping judicial over-reach. Now, Clarke Forsythe has proved the worst fears of these legal titans were more than justified. Abuse of Discretion not only exposes the legal and factual errors the Court made in 1972, but meticulously documents the far-reaching and deleterious effects of the Court’s rush to judgment.”


“Whatever your opinions on abortion, this book raises troubling questions about the lack of information, and in some cases blatant misinformation, on which the Court decided the abortion issue in 1973. If the courts take upon themselves the authority to decide moral and medical questions of this importance, it is not too much to ask that they adhere to rigorous standards of evidence.”


“This is an astonishing, amazing, inside-peek at the process that produced one of America's most controversial constitutional decisions of all time. By scouring through the justices' personal papers, Clarke Forsythe has done an incredible job of unearthing the secret story of how and why the Supreme Court decided Roe v. Wade as it did. This is original and insightful history.”


“The Supreme Court's creation of a constitutional right to abortion in the Roe v. Wade case is widely acknowledged to be completely indefensible as a matter of constitutional law. In this fine book, Clarke Forsythe, one of our finest constitutional scholars writing on abortion jurisprudence, explores not only the legal weaknesses of Roe and its progeny, but also the astonishing medical and public policy errors on which the decision was based. This is a landmark work on abortion, the Constitution, and the Supreme Court.”

“The importance of judges following proper procedure is critical to insure ‘equal justice under law’ (the ideal inscribed on the U.S. Supreme Court building)—not only to protect the parties but to justify American citizens' faith in our judicial institutions. That is why Clarke Forsythe's examination in Abuse of Discretion is such a critical piece of legal history. With more than 25 years of legal experience researching, writing and lawyering about abortion issues, Mr. Forsythe is imminently qualified to write this important book. Mr. Forsythe's remarkable, revelatory research merits the most careful consideration. It has the potential to reshape our view (and the future) of Roe v. Wade.”

▼▲
I'm the author/artist and I want to review Abuse of Discretion: The Inside Story of Roe v. Wade.
Back
Back