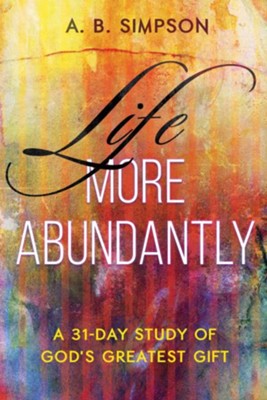 ▼▲
In this month long study, famed pastor and evangelist A. B. Simpson delves into the meaning of life itself, helping the believer to develop an understanding and appreciation of the indwelling Christ as the source of victory.
Christians were never meant to lead insignificant lives devoid of impact or achievement. By focusing on the abundant life that God offers, you can make the most out of the days you have been given.

▼▲
Albert Benjamin Simpson (1843–1919) was born to parents of Scottish descent and grew to become one of the most respected Christian figures in American evangelicalism. A much-sought-after speaker and pastor, Simpson founded a major evangelical denomination, published more than seventy books, edited a weekly magazine for nearly forty years, and wrote many gospel songs and poems.
The first few years of his life were spent in relative simplicity on Prince Edward Island, Canada, where his father, an elder in the Presbyterian church, worked as a shipbuilder and eventually became involved in the export/import industry. To avoid an approaching business depression, the family moved to Ontario, where the younger Simpson accepted Christ as his Savior at age fifteen and was subsequently "called by God to preach" the gospel of Christ.
Simpson went on to pastor New York’s 13th Street Presbyterian Church. However, in 1881, he resigned and began to hold independent evangelistic meetings in New York City. A year later, the Gospel Tabernacle was built, and Simpson began to turn his vision toward establishing an organization for missions. Simpson helped to form and lead two evangelization societies: The Christian Alliance and The Evangelical Missionary Alliance. As thousands joined these two groups, Simpson sensed a need for the two to become one. In 1897, they became The Christian and Missionary Alliance.

▼▲
I'm the author/artist and I want to review Life More Abundantly: A 31-Day Study of God's Greatest Gift - eBook.
Back
Back