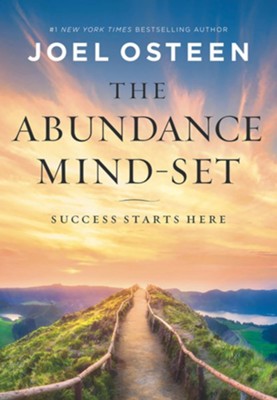 ▼▲
Go beyond the ordinary and break out into the extraordinary life God designed for you through a mentality of abundance with help from #1 New York Times bestselling author and Lakewood Church pastor Joel Osteen!
We all have a vision of our lives and ourselves. What does your picture look like? Do you see yourself rising higher, overcoming obstacles, and living an abundant life? Or do you have a picture of yourself struggling, defeated, addicted, overweight, and never getting good breaks? The pictures you allow in your mind will determine what kind of life you live.
God's dream for your life is that you would be blessed in such a way that you could be a blessing to others. Dare to have a big vision for an abundant life, and trust God to bring it to pass. Through The Abundance Mind-Set, Joel can help you change your defeatist mind-set so that one day soon, instead of just having a dream, you'll be living the dream. Your vision will become reality.

▼▲
Joel Osteen is the author of ten New York Times bestsellers and the senior pastor of Lakewood Church in Houston. He has been named by numerous publications as one of the most influential Christian leaders in the world. His televised messages are seen by more than 10 million viewers each week in the United States and millions more in 100 nations around the world. He is also the host of Joel Osteen Radio, a 24-hour channel on SiriusXM Satellite Radio channel 128. He resides in Houston with his wife, Victoria, and their children. You can visit his website at www.joelosteen.com and find him on Facebook at www.facebook.com/JoelOsteen.

▼▲
I'm the author/artist and I want to review The Abundance Mind-Set: Success Starts Here - eBook.
Back
×
Back
×