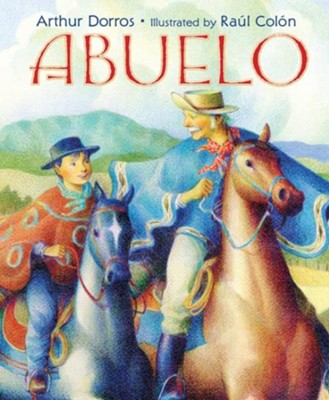 Together, a young boy and his abuelo (grandfather) go camping, ride horses, and even confront a mountain lion. Soon, the boy's family moves to the city from the country, away from Abuelo, and it is the boy's memories that help him adjust to his new life.

Arthur Dorros's skillful blend of Spanish and English and Raúl Colón's poignant paintings illuminate how the special bond between an abuelo and a nieto (grandson) reaches across miles. Fans of Dorros's Papá and Me and Abuela will delight in this bilingual and multigenerational picture book about a special family relationship.

Arthur Dorros views being a writer like being a traveling detective. He finds ideas all around. He learned Spanish while living in Latin America, and many of his stories, such as Abuelo, grow from those experiences. Arthur is the author of many books for children, including Julio's Magic, a CLASP Américas Award Commended Title; Papá and Me, a Pura Belpré Honor Book; and the popular Let's-Read-and-Find-Out Science book Ant Cities. He lives in Seattle, Washington.

Raúl Colón was born in New York City, studied art in Puerto Rico, and designed puppets and animated films in Florida. An illustrator of over thirty books for children, Raúl has received a Golden Kite Award, a Pura Belpré Award, and both a gold and silver medal in the Original Art show. He currently resides in New York City with his family.

▼▲
I'm the author/artist and I want to review Abuelo.
Back
×