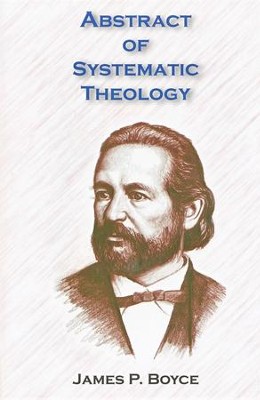 ▼▲
A concise systematic theology by the principle founder of the first Southern Baptist seminary. Appendices include: "A Brief Catechism of Bible Doctrine," Abstract of Principles and a Scripture Index.

The doctrinal stream in which Boyce's views are found can rightly be called Calvinistic or Reformed. He, like most early Southern Baptist leaders, was clearly convinced of the doctrines of sovereign grace. John Broadus, Boyce's friend and colleague, made this observation about what he called "that exalted system of Pauline truth" expounded in Boyce's Abstract:

"The people who sneer at what is called Calvinism, might as well sneer at Mont Blanc. We are not bound in the least to defend all of Calvin's opinions or actions, but I do not see how any one who really understands the Greek of the Apostle Paul or the Latin of Calvin or Turretin can fail to see that these latter did but interpret and formulate substantially what the former teaches."

May the Lord use this book from the pen of one of the greatest Southern Baptists ever to live to promote reformation and revival throughout churches everywhere.

-from the Publisher's Introduction

▼▲
I'm the author/artist and I want to review Abstract of Systematic Theology.
Back
Back