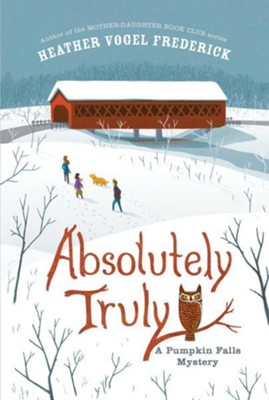 ▼▲
An unsent letter in a first edition copy of Charlotte’s Web leads to a hunt for treasure in this heartwarming middle grade mystery from the author of The Mother-Daughter Book Club.

Now that Truly Lovejoy’s father has been injured by an IED in Afghanistan and is having trouble finding work back home, the family moves from Texas to tiny Pumpkin Falls, New Hampshire, to take over Lovejoy’s Books, a struggling bookstore that’s been in the family for one hundred years.

With two older brothers and two younger sisters clamoring for attention, her mother back in school, and everyone up to their eyebrows trying to keep Lovejoy’s Books afloat, Truly feels more overlooked than usual. So she pours herself into uncovering the mystery of an undelivered letter she finds stuck in a valuable autographed first edition of Charlotte’s Web, which subsequently goes missing from the bookshop. What’s inside the envelope leads Truly and her new Pumpkin Falls friends on a madcap treasure hunt around town, chasing clues that could spell danger.

▼▲
Heather Vogel Frederick is the award-winning author of the Mother-Daughter Book Club series, the Pumpkin Falls Mystery series, the Patience Goodspeed books, the Spy Mice series, and Once Upon a Toad. An avid fan of small towns like Pumpkin Falls, Heather and her husband live in New England, close to where Heather grew up. You can learn more about the author and her books at HeatherVogelFrederick.com.

▼▲
"There's never a dull moment in Pumpkin Falls with Truly Lovejoy on the case in this contemporary, feel-good series opener." -- Kirkus Reviews

▼▲
I'm the author/artist and I want to review Absolutely Truly.
Back