We are OPEN and SHIPPING - click here for shipping estimates
PRE-SUMMER CYBER SALE EXTENDED thru 6/1 ~ Over 2,500 items up to 90% off
Absolute Truths - eBook
By: Susan Howatch 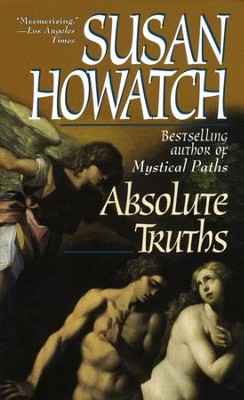 ▼▲
"A SKILLFUL BLEND OF CHARACTER, PHILOSOPHY AND
NARRATIVE. . .Formidable personalities embroil themselves in ruthless power struggles that would make a corporate raider blush."
--The Washington Post Book World
It is 1965, and Charles Ashworth has attained the plum position of bishop of Starbridge, an honor that keeps him in a heady whirl of activity that would exhaust the most seasoned corporate executive. With the invaluable support of his minions and his attractive, unsinkable wife, Ashworth stands against the amorality and decadence of the age--"Anti-Sex Ashworth." He slays his opponents by being a tough, efficient, confident churchman, the torments of his past long since dead and buried.
And then the unexpected, the unthinkable, strikes.
Suddenly Ashworth finds himself staring into the chasm of all the lies hes been telling himself for years: about his marriage, his children, even his views on the Church. And as he suspects his old nemesis and dean, Neville Aysgarth, of drinking too much, of financial chicanery, of--God forbid--having an affair, Ashworth discovers to his horror that he is tempted to commit the very acts that he has so publicly
denounced. . . .
"ENTHRALLING. . .Rich, dense, almost indecently entertaining."
--San Jose Mercury News
"POWERFUL. . .MIRACULOUS."
--Booklist (starred review)
SELECTED BY THE BOOK-OF-THE-MONTH CLUB

▼▲
Susan Howatch was born in Surrey. After getting a degree in law, she emigrated to America, where she married, had a daughter, and embarked on a career as a writer. When she eventually left the United States, she lived in the Republic of Ireland for four years before returning to England. She spent time in Salisbury—which was the inspiration for her Starbridge sequence of novels—and now lives in London.

▼▲
I'm the author/artist and I want to review Absolute Truths - eBook.
Back
×
Back
×