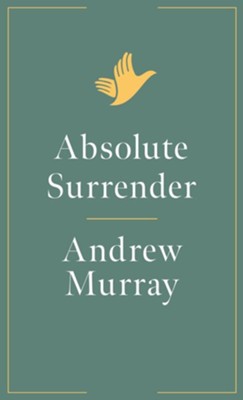 ▼▲
"My Lord, O King, according to thy saying, I am thine, and all that I have." Words of absolute surrender with which every child of God ought to yield himself to his Father. If our hearts are willing for that, there is no end to what God will do for us, and to the blessing God will bestow.'How many times have you left a prayer meeting or revival service determined to dedicate every area of your life to God, only to feel frustrated and defeated a few days later? We all want to be absolutely surrendered to God, and yet we hardly dare utter the words. We don't exactly know how. Andrew Murray clearly and simply explains full surrender to God and shows the way to a victorious life in Him.

▼▲
ANDREW MURRAY (1828-1917) was a church leader, evangelist, and missionary statesman. As a young man, Murray wanted to be a minister, but it was a career choice rather than an act of faith. Not until he had finished his general studies and begun his theological training in the Netherlands, did he experience a conversion of heart. Sixty years of ministry in the Dutch Reformed Church of South Africa, more than 200 books and tracts on Christian spirituality and ministry, extensive social work, and the founding of educational institutions were some of the outward signs of the inward grace that Murray experienced by continually casting himself on Christ. A few of his books include The True Vine, Absolute Surrender, The School of Obedience, Waiting on God, and The Prayer Life.

▼▲
I'm the author/artist and I want to review Absolute Surrender - eBook.
Back
×
Back
×