Skip to main content
Absence of Mind: The Dispelling of Inwardness from the Modern Myth of the Self
By: Marilynne Robinson
Stock No: WW171471 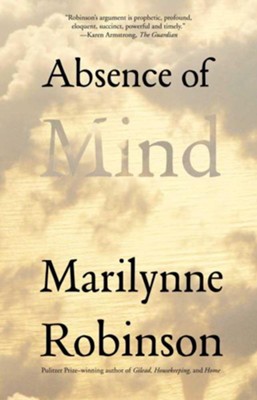 Absence of Mind: The Dispelling of Inwardness from the Modern Myth of the Self

In this ambitious book, acclaimed writer Marilynne Robinson applies her astute intellect to some of the most vexing topics in the history of human thought—science, religion, and consciousness. Crafted with the same care and insight as her award-winning novels, Absence of Mind challenges postmodern atheists who crusade against religion under the banner of science. In Robinson’s view, scientific reasoning does not denote a sense of logical infallibility, as thinkers like Richard Dawkins might suggest. Instead, in its purest form, science represents a search for answers. It engages the problem of knowledge, an aspect of the mystery of consciousness, rather than providing a simple and final model of reality.

By defending the importance of individual reflection, Robinson celebrates the power and variety of human consciousness in the tradition of William James. She explores the nature of subjectivity and considers the culture in which Sigmund Freud was situated and its influence on his model of self and civilization. Through keen interpretations of language, emotion, science, and poetry, Absence of Mind restores human consciousness to its central place in the religion-science debate.

▼▲
"There is much to admire, and even to agree with, in Robinson's humanist passion. Her defense of the insights to be gained from religion and literature is as convincing as her attacks on the facile generalizations of parascience."—Adam Kirsch, Boston Globe

"[Robinson] makes the case with exceptional elegance and authority—the authority not only of one of the unmistakably great novelists of the age but of a clear and logical mind that is wholly intolerant of intellectual clich&eacute;. . . . This book has a greater density (and sophistication) of argument than many three times its length; but it is one of the most significant contributions yet to the current quarrels about faith, science and rationality."—Rowan Williams, Archbishop of Canterbury, Daily Telegraph

"I enjoyed reading Absence of Mind. The reason: it is always a pleasure to keep company with a person who takes ideas seriously."—Siri Hustvedt, Financial Times

"Those who savor Robinson's clear prose will be gratified; her mind, in thought, is elegant."—Publishers Weekly

"Robinson's arguments [are] so much more interesting, capacious, and informed than most. . . . Robinson makes a strong, unapologetic case, not for mystery but for self-respect."—Susan Salter Reynolds, Los Angeles Times

"At a moment in cultural history dominated by the shallow, the superficial, the quick fix, Marilynne Robinson is a miraculous anomaly: a writer who thoughtfully, carefully, and tenaciously explores some of the deepest questions confronting the human species."—Merle Rubin, Los Angeles Times Book Review on Gilead

"Pulitzer Prize-winner Robinson may be the only living novelist who has made a genuine contribution to philosophical reflection. . . . One of the most thought-stirring inquiries into fundamental questions that has appeared in many years."—John Gray, Globe & Mail

"[Robinson] is one of the best thinkers in American letters. Her new (nonfiction) work is a slashing attack on scientific fundamentalism, not on behalf of religion but of human consciousness and our traditional concept of mind."—Maclean’s

"Marilynne Robinson asks hard questions. She challenges readers with a severe, sophisticated and spellbinding style and a determination to change the conversation about contemporary American culture. . . . Absence of Mind is important not so much as a brief for religion but as a tenacious and often trenchant critique of modern Western thought."—Glenn Altschuler, Minneapolis Star-Tribune

"What Robinson has over both the parascientific writers whose work she rejects and the religion writers with whom she finds common ground is a long career (though few books) as a fiction writer, where she has demonstrated—and in her way, provided evidence of—the very contemplative, subjective lives of the faithful she defends in her new book."—Scott Korb, The Revealer

"[Robinson reveals] how deep a debt both science and religion owe to art. . . . It is a rare treat to have a novelist express herself so forcefully, and so eloquently, in another medium."—Ingrid Rowland, American Scholar

"[Not] an anti-scientific jeremiad. Quite the contrary, for Robinson admires all that genuine science continues to offer us. . . . Her wonderful defense of an expansive self in a diminishing age deserves a wide readership."—Thomas DePietro, Barnes & Noble Review

"The scope of Robinson's erudition is stunning, and she shares it with generosity and no dissembling."—Linda McCullough Moore, Books & Culture

"Marked by a luminous intelligence and a rather attractive intellectual severity. . . . One really must read it to appreciate how powerful a counterinsurgency it mounts against many of the peculiar superstitions of our age."—David B. Hart, Big Questions Online

"Robinson applies her astute intellect to . . . science, religion and consciousness. Crafted with the same care and insight as her award-winning novels, the book challenges postmodern atheists who crusade against religion under the banner of science."—Washington Times


"Following the inward-looking path of her award-winning fiction, Marilynne Robinson's Absence of Mind is a finely wrought treatise in favour of religious belief."—Chris Lehmann, The Nation

"A book of dense philosophy from a brilliant novelist with a poet's ear. It is stunning. It places Robinson among the very brightest of Christian history's thinkers and writers. . . . I cannot praise it too highly."—Kurt Armstrong, Christian Week

"This deeply informed essay affirms mystery, imagination and wonder against the 19th-century remnants of positivism still delimiting the human in the name of a reduced and reductive science."—San Francisco Chronicle

"This work of philosophy by a distinguished novelist is one of the most thought-stirring inquiries into fundamental questions in many years."—John Gray, Globe & Mail

"Readers interested in seriously thinking about science, culture, and religion, and their interrelationships, will find this book rewarding."—S. C. Pearson, Choice

"One of the best things about the literature of the New Atheists is that, for all the supercilious question-begging, it has provoked a number of highly literate and memorable responses. This is one of them."—Barton Swaim, The Weekly Standard

"Absence of Mind is a succinct and carefully reasoned challenge to those who would say that all our thoughts, beliefs, aspirations, and intimations of immortality are only a combination of wishful thinking and outdated primitive beliefs."—Dr. Jean McCurdy Meade, The Living Church

"Marilynne Robinson is one of those rare novelists whose work, though galvanized by a theological impulse, is adored by believers and atheists in equal measure. . . . We experience [her characters'] interiority almost as naturally as our own, and respond to it emotionally, intellectually, even spiritually. Robinson's latest collection, Absence of Mind, gets to the hear of that creative force, while reminding us what little heed she pays intellectual fashion."—Stefan Beck, The New Criterion

▼▲
I'm the author/artist and I want to review Absence of Mind: The Dispelling of Inwardness from the Modern Myth of the Self.
Back