Skip to main content
SPRING CYBER EVENT STARTS NOW: And it's a really BIG deal! Up to 88% off through 5/24>
Abraham's Promise: Judaism and Jewish-Christian Relations
By: Michael Wyschogrod
Stock No: WW813550 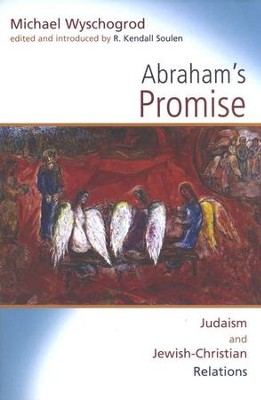 ▼▲
Open this reader and delve into the best short writings---including several newly published essays---by Wyschogrod, noted Jewish philosopher-theologian. Capturing the broad scope of his work on Judaism and the Jewish-Christian encounter, this seminal collection addresses topics including sin and atonement, the Six-Day War, the theology of Karl Barth, and more. 267 pages, softcover from Eerdmans.

▼▲
Abraham's Promise presents a selection of important writings by noted Jewish philosopher-theologian Michael Wyschogrod, who is widely admired for his singular contributions to Jewish- Christian relations. Including several pieces never published before, this reader aptly captures the broad scope of Wyschogrod's work on Judaism and the Jewish-Christian encounter, collecting seminal essays, articles, and reviews that address such topics as the God of Abraham and the God of philosophy, sin and atonement, Judaism and the land, the Six Day War, Paul on Jews and Gentiles, and the theology of Karl Barth. An introductory essay by editor R. Kendall Soulen sets Wyschogrod's career and writings in context.

▼▲
Michael Wyschogrod is professor emeritus of philosophy at Baruch College of the City University of New York. He is the author of The Body of Faith: God in the People Israel.

▼▲
Rabbi Eugene B. Borowitz
"Michael Wyschogrod's penetrating vision and fearless approach to old questions have long stimulated and instructed serious students of Judaism. Everyone who cares about the dimensions of Jewish faith will benefit greatly from this collection of his papers."

Jon D. Levenson
"Wyschogrod is the most interesting and most astute Jewish theologian writing today. His insights flow from the deep sources of Judaism in the Bible and the rabbinic tradition and profoundly illuminate not only Judaism but Christianity as well. No one interested in Jewish-Christian relations can afford to miss these lucid and engaging essays."

Marvin R. Wilson
"The cr &egrave;me de la cr&egrave;me of the Wyschogrod legacy. . . Abraham's Promise is a must for theological minds that value the importance of hearing both testaments whenever Scripture is read and reflected upon."

Robert W. Jenson
"When I first heard Michael Wyschogrod many years ago, I knew that here is a Jewish theologian whom Christian theology needs for its own sake. Kendall Soulen's labor of love is therefore a blessing."

▼▲
I'm the author/artist and I want to review Abraham's Promise: Judaism and Jewish-Christian Relations.
Back
Back