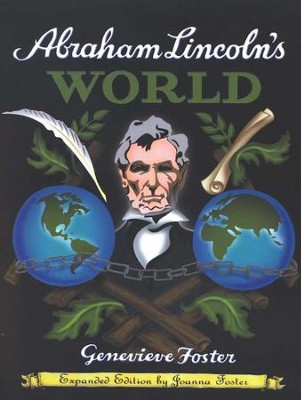 By: Genevieve Foster
Beautiful Feet Books / 1944 / Paperback
5 out of 5 stars for Abraham Lincoln's World (3 Reviews) Write a Review
Expected to ship on or about 06/18/21.
Email me when this product is available.
Stock No: WW78311

▼▲
The 1940 Newbery Honor title, Abraham Lincoln's World sets American history into a world context. Short, beautifully written stories explain what was going on during the years of Abraham Lincoln's birth, childhood, employment as a storekeeper and lawyer, and finally during his years as president. Discover that when Abe Lincoln was a boy romping the woods of Kentucky, Thomas Jefferson was completing his eighth year as president, George III reigned in Great Britain and Napolean was about to meet his Waterloo. By the time Lincoln was old enough to help his father chop wood, Harriet Beecher was reading anything she could get her hands on, Charles Darwin was collecting toads, crabs and shells, and the impoverished boy Dickens was working in a shoe blacking factory in London. Have fun as you learn all about the intersections in history we often don't see! 345 pages, softcover. Ages 9 & up.

▼▲
I'm the author/artist and I want to review Abraham Lincoln's World.
Back
Back