Skip to main content
NEW CYBER DEALS Save up to 90% thru 12/12  shop now >
Abraham Lincoln: The Great Emancipator
By: Augusta Stevenson, Jerry Robinson
Stock No: WW420307 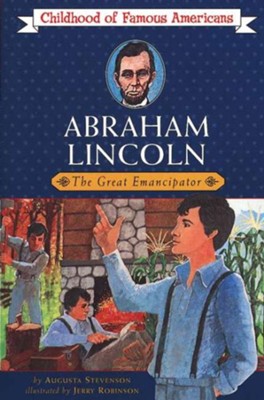 ▼▲
Loved by children, adults and educators, the Childhood of Famous Americans series brings history alive with lively and fictionalized biographies. Children love to read the inspiring tales, and pick up history while they're enjoying reading.

▼▲
Explore the childhood of legendary US President Abraham Lincoln, whose legacy as a Civil War leader and lover of freedom makes him an unforgettable all-star in American history.

Abraham Lincoln received less than two years of formal education, but he had a passion for knowledge: he would walk for miles to borrow a book and eventually taught himself to become a lawyer. His legal career lead to a term in the US House of Representatives, and he was later selected as the Republican presidential candidate in 1860 and elected president. Shortly after his inauguration, the Civil War broke out, and for the rest of his life, Lincoln served as a wartime president, achieving the hugely challenging task of keeping the Union together until the Confederate surrender in April of 1865. Weeks later Lincoln was assassinated, but his legacy lives on.

From his humble beginnings in a Kentucky log cabin to his stepmother’s encouragement of education, the details of Abraham Lincoln’s childhood are revealed in this narrative biography about the events and influences that made him into the exceptional American leader he became.

▼▲
I'm the author/artist and I want to review Abraham Lincoln: The Great Emancipator.
Back
Back