We are OPEN and SHIPPING - click here for shipping estimates
PRE-SUMMER CYBER SALE EXTENDED thru 6/1 ~ Over 2,500 items up to 90% off
Abraham Lincoln: Selected Speeches and Writings
By: Abraham Lincoln 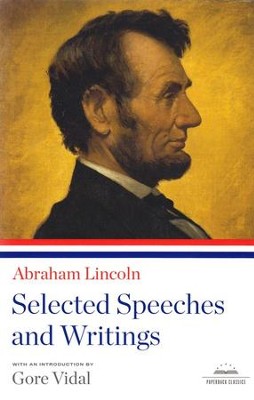 ▼▲
Read Lincoln's own words! Perfect for primary research, this book of Lincoln's speeches and writings spans his life, from his campaigns for office to the evolution of his anti-slavery stance to the speeches made towards the end of his presidency. 515 pages, indexed, softcover. Arranged chronologically.

▼▲
Featuring a foreward by Gore Vidal, this collection offers a glimpse inside the mind of the 16th U.S. President and a snapshot of 19th-century America

Ranging from finely honed legal argument to wry and some sometimes savage humor to private correspondence and political rhetoric of unsurpassed grandeur, the writings collected in this volume are at once a literary testament of the greatest writer ever to occupy the White House and a documentary history of America in Abraham Lincoln's time. They record Lincoln's campaigns for public office; the evolution of his stand against slavery; his electrifying debates with Stephen Douglas; his conduct of the Civil War; and the great public utterances of his presidency, including the Emancipation Proclamation and the Gettysburg Address.

Library of America Paperback Classics feature authoritative texts drawn from the acclaimed Library of America series and introduced by today's most distinguished scholars and writers. Each book features a detailed chronology of the author's life and career, and essay on the choice of the text, and notes.

The contents of this Paperback Classic are drawn from Abraham Lincoln: Speeches and Writings 1832- 1858 and Abraham Lincoln: Speeches and Writings 1859-1865, volumes number 45 and 46 in the Library of America series. They are joined in the series by a companion volume, number 192s, The Lincoln Anthology: Great Writers on his Life and Legacy from 1860 to Now.

Abraham Lincoln (1809-1865) was the sixteenth president of the United States, guiding the nation through the Civil War before becoming one of its final vicitims, assasinated at Ford's Theater in Washington on April 15, 1865, less than a week after the surrender of the Confederate army at Appomattox.

▼▲
I'm the author/artist and I want to review Abraham Lincoln: Selected Speeches and Writings.
Back
×
Back
×