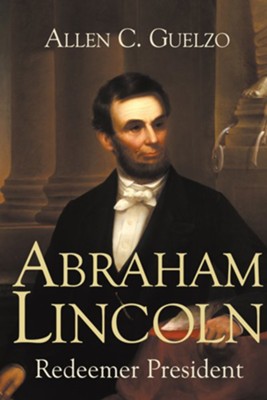 ▼▲
Winner of the prestigious Lincoln Prize for the best work on the Civil War published in 1999! "A full-scale intellectual biography that follows the course of Lincoln's political career but also takes him seriously as a thinker. Deeply probes his religious and political roots,"---First Things. 528 pages, softcover.

▼▲
An enlightening "intellectual biography" of Lincoln, Allen Guelzo's peerless account of America's most celebrated president explores the role of ideas in Lincoln's life, treating him as a serious thinker deeply involved in the nineteenth-century debates over politics, religion, and culture. Written with passion and dramatic impact, Guelzo's masterful study offers a revealing new perspective on a man whose life was in many ways a paradox.

Since its original publication in 1999, Abraham Lincoln: Redeemer President has garnered numerous accolades, not least the prestigious 2000 Lincoln Prize. As journalist Richard N. Ostling has noted, "Much has been written about Lincoln's belief and disbelief," but Guelzo's extraordinary account "goes deeper."

▼▲
Allen C. Guelzo is a New York Times best-selling author, senior research scholar in the Council of the Humanities at Princeton University, and the director of the Initiative on Politics and Statesmanship for Princeton's James Madison Program in American Ideals and Institutions. He has published several works on Civil War-era history, including Robert E. Lee: A Life, Gettysburg: The Last Invasion, Fateful Lightning: A New History of the Civil War and Reconstruction, and Lincoln's Emancipation Proclamation: The End of Slavery in America.

▼▲
The Historical Journal
"Guelzo's is a satisfying portrait, perhaps because he has been a scholar of Jonathan Edwards, so is more conscious of the intellectual and political contexts that preceded and made Lincoln, but less concerned with the retrospective usefulness of Lincoln as a national icon."

Times Literary Supplement
"Abraham Lincoln: Redeemer President is the best study of Lincoln's religious thought, and all the better because it situates that thought in the context of Lincoln's whole career. Guelzo's purpose is to take Lincoln seriously 'as a man of ideas.' He succeeds admirably. . . .But it is in his analysis of Lincoln's religious ideas that Guelzo makes his most important contribution."

Choice
"Guelzo's book, the first true intellectual biography of the man the author calls America's 'redeemer president,' ranks among the most significant half-dozen studies of Lincoln during a remarkable decade of scholarship. . . . Especially perceptive is Guelzo's portrayal of Lincoln's odyssey from youthful scoffer to perhaps most religious of US presidents, ever rejecting the ritual and denominational dogma of public worship but increasingly taken with a personal form of Calvinist spirituality culminating in his immortal Second Inaugural Address, arguably the most profound exploration of religious values ever penned by an American author. . . Recommended for literate readers at all levels."

>Publishers Weekly
"Is it possible that amid the voluminous literature on Abraham Lincoln, there is room for yet another study? Allen Guelzo's Abraham Lincoln eloquently proves that there is, since religion has been sorely neglected by historians of Lincoln and the Civil War."

The Wall Street Journal
"The number of books about Abraham Lincoln is almost beyond counting. . . Unique among this outpouring is Allen C. Guelzo's 'Abraham Lincoln: Redeemer President,' an intellectual biography of a president who was, at bottom, a man of ideas. . . Interestingly, for Lincoln the mixing of moralism and politics came rather late. . . With the approach of the Civil War, he began to make use of religious imagery in his public statements, while the war itself seemed to provoke in him something close to a religious quest to discover its meaning. Dissecting this quest forms the core of 'Redeemer President,' and the job Mr. Guelzo does of it is masterly. . . It is a testament to the strength of 'Redeemer President' that the matters it addresses resist easy summary. The value of the book itself, however, is easy enough to state: Out of the countless volumes written about our 16th president, it ranks quite simply among the best."

The Weekly Standard
"One of the subtlest and deepest studies of Lincoln's faith and thought in many years. . . Seldom has the complex connection between Lincoln's predispositions and Lincoln's achievements been more insightfully studied than in Allen Guelzo's superb book."

Wilson Quarterly
"This rich and subtle study of Lincoln's intellectual life well deserves to have received the prestigious Lincoln Prize; it is superb."

The Historian
"With the freshness of insight often afforded scholars who cross disciplinary boundaries, the author, a student of intellectual and religious history, makes an important contribution to the field of Lincoln studies. . . This is a thoughtful, engaging, and provocative book that will enlighten both Civil War specialists and students of American history."

>The Filson Club History Quarterly
"This co-winner of the 1999 Lincoln Prize is a subtle, insightful, and convincing analysis of Abraham Lincoln. . . .Guelzo's analysis is sound and generally convincing. . . This is one of the most important books in a decade rich in Lincoln scholarship."

▼▲
I'm the author/artist and I want to review Abraham Lincoln: Redeemer President.
Back
Back