Skip to main content
BIG SUMMER BLOWOUT: Over 2,000 deals ~ up to 85% off, through 8/16. Shop now >
Abraham Lincoln and Frederick Douglass: The Story Behind an American Friendship
By: Russell Freedman
Stock No: WW385624 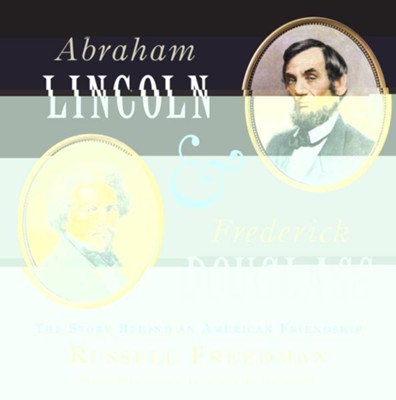 Abraham Lincoln and Frederick Douglass: The Story Behind an American Friendship

▼▲
From the author of Lincoln: A Photobiography, comes a clear-sighted, carefully researched account of two surprisingly parallel lives and how they intersected at a critical moment in U.S. history. Abraham Lincoln and Frederick Douglass were both self-taught, both great readers and believers in the importance of literacy, both men born poor who by their own efforts reached positions of power and prominence—Lincoln as president of the United States and Douglass as the most famous and influential African American of his time. Though their meetings were few and brief, their exchange of ideas helped to end the Civil War, reunite the nation, and abolish slavery. Includes bibliography, source notes, and index.

▼▲
Russell Freedman received the Newbery Medal for Lincoln: A Photobiography. He is also the recipient of three Newbery Honors, the Sibert Medal, the Orbis Pictus Award, the Boston Globe–Horn Book Award, the Laura Ingalls Wilder Award, and a National Humanities Medal, and was selected to give the 2006 May Hill Arbuthnot Honor Lecture. Mr. Freedman lives in New York City.

▼▲
Freedman revisits the subject of his Newbery-winning Lincoln: A Photobiography (1987), but this time the 16th president shares billing with his friend and ally, abolitionist Frederick Douglass. The story opens with Douglass anxiously waiting to meet Lincoln for the first time to air grievances about the treatment of African-American soldiers during the Civil War. At forty-five... he was a commanding figure, taller than most men, with a powerful athletes build, graying hair, penetrating brown eyes and a carefully trimmed beard. Subsequent chapters detail the leaders often parallel biographies. Both were self-made and shared a passion for reading, rising from poverty to prominence. In clear, accessible storytelling, Freedman brings the book back full circle to the pairs first meeting. Reprints of b&w photographs, engravings, political cartoons, and posters appear throughout (the most graphic of which depicts the hanging of a captured African-American soldier). Appendices, source notes, and a bibliography conclude what is not only the story of two powerful men who shaped the course of the United States, but also a brief history of the war that raged while they forged a fast but deep friendship. Ages 912. (June)2012 Reed Business Information

"True to form, Freedman relies heavily on period illustrations and primary and secondary sources, breathing life into both men through a generous assortment of their own words."
—Horn Book

"This book would be an asset for any classroom because it shows how two men set lasting examples of equality, integrity, and selflessness."
—VOYA, 5Q 4P MJ

"Freedman does not deviate an inch from his customary knack of selecting the precise details an adolescent reader will require to sort through complex issues and often conflicted personalities."
—Bulletin

▼▲
I'm the author/artist and I want to review Abraham Lincoln and Frederick Douglass: The Story Behind an American Friendship.
Back