We are OPEN and SHIPPING - click here for shipping estimates
PRE-SUMMER CYBER SALE: Shop over 2,500 items up to 90% off through 5/26 >
Abraham Lincoln and the Road to Emancipation, 1861-1865 - eBook
By: William Klingaman 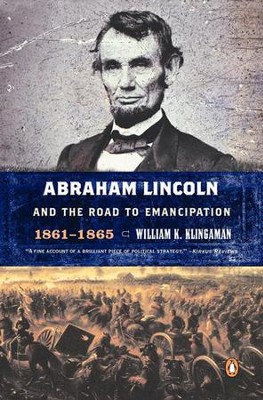 ▼▲
In this comprehensive account of Abraham Lincoln's Emancipation Proclamation, William K. Klingaman takes a fresh look at what is arguably the most controversial reform in American history. Taking the reader from Lincoln's inauguration through the Civil War to his tragic assassination, it uncovers the complex political and psychological pressures facing Lincoln in his consideration of the slavery question, including his decision to issue the proclamation without consulting any member of his cabinet, and his meticulous attention to every word of the document. The book concludes with a discussion of what the Emancipation Proclamation really meant to four million newly freed blacks and its subsequent impact on race relations in America.

▼▲
William K. Klingaman is the author of several books of cultural history, including 1919: The Year Our World Began and 1929: The Year of the Great Crash.

▼▲
"Lincoln emerges from this study . . . as an astute, troubled and effective defender of the Union." —Publishers Weekly

"A fine account of a brilliant piece of political strategy." —Kirkus Reviews